Former adviser to US president Donald Trump, Steve Bannon, has said that anyone leaking information from the White House to the media should resign. Video: 60 Minutes/CBS 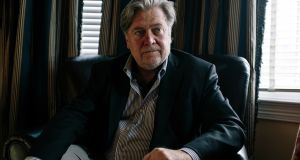 He may no longer have a desk in the West Wing, but the influence of Steve Bannon on US politics shows no sign of waning. At Monday’s White House press briefing, queries about the US president’s former chief strategist dominated questions, prompting press secretary Sarah Huckabee Sanders to quip: “I think we may be answering more questions on Steve Bannon, now that he’s not here, than when he was. But go ahead . . . ”

The reason? An interview on CBS’s 60 Minutes on Sunday morning, in which Bannon shed some light on life in the White House under Donald Trump.

Perceived by many as the brainchild behind Trump’s unlikely ascent to the presidency of the United States in November, Bannon parted ways with his boss last month, one of a series of personnel departures to beset the White House during the summer. Rumours of his marginalisation within the West Wing had preceded his departure, though it was the arrival of John Kelly as chief of staff that appears to have sealed his fate.

If Trump is often criticised for lacking any specific ideology, Bannon was the man who filled that void, creating a particular brand of economic nationalism that helped convince millions of disenfranchised working-class white Americans to embrace the billionaire property developer in last year’s election.

But the man who graced the cover of Time magazine in February under the title “The Great Manipulator” was also a testy presence in the White House, sparring with other members of the administration, including Trump’s daughter and son-in-law, Ivanka and Jared Kushner.

Within hours of his resignation on August 18th, Bannon had returned to Breitbart News, the right-wing website he ran before joining the administration, chairing the editorial news conference that evening. He has now decamped to the other side of Washington to a house on Capitol Hill from where Breitbart’s Washington operations are run.

He is reported to have met several senior Republicans and Republican donors in recent weeks. But it is not Trump who should be worried. Bannon’s ire appears to be directed at Republicans in Congress, who he believes have failed to engage with the specific form of conservatism that Trump embodies and which helped win him the election.

He specifically criticised House speaker Paul Ryan and the senior Republican in the senate, Mitch McConnell, during the CBS interview, accusing them of “trying to nullify the 2016 election”.

Bannon’s intervention is significant in light of last week’s surprise decision by Trump to side with Democrats rather than his own party during a meeting on extending the US debt ceiling, a move that blindsided Ryan and McConnell. The president also took to Twitter during the summer months to criticise senior Republican figures, particularly McConnell.

Rather than having bitterness towards his old boss, Bannon seems emboldened by a belief that the conservative nationalist politics championed by Trump have not been sufficiently appreciated by Republicans in Congress. This could help Trump, as he tries to lay the blame for the lack of any substantive policy win at the door of Congress and the mainstream Republican party.

But Bannon – whether through Breitbart or though his influence on powerful Republican donors like Robert Mercer and his daughter Rebekah – may also have the power to hold Trump’s White House to account, to a much greater extent than he could as a member of the administration where he competed with others for the president’s ear.

The nature of Trump and Bannon’s relationship since his departure is unclear – Sarah Huckabee Sanders suggested during Monday’s press conference that Trump had spoken to him just once by phone since they parted ways.

But the president would be wise to listen to the counsel of his former right-hand man.

One of the most significant comments delivered by Bannon in his first substantial interview since leaving the White House was an observation that should worry the president. He described Trump’s decision to fire FBI director James Comey as the biggest mistake in “modern political history”.

With the special investigation into the Trump camp’s links with Russia gathering pace under Robert Mueller, Bannon’s words could prove prescient.