Podcast: Obama’s speechwriter on the chaos of Trump’s White House 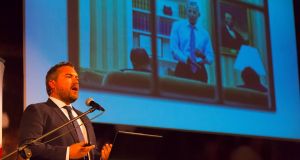 As Barack Obama’s head speechwriter, Cody Keenan was involved in drafting the now-infamous public skewering of Trump back in 2011, a humiliation some see as motivating Mr Trump to enter politics.

“Do I feel any responsibility? No. And plus, he deserved it. This was this is a guy still who began his political career by with racist insinuations that the president of United States was a foreigner,” Cody tells Chris Dooley on this week’s World View podcast.

“I wish we went harder”.

“This was specifically one of the issues he said he would speak up about. Whenever American values are threatened, whenever various groups of Americans are targeted.”

He understands the criticism Obama came under for breaking the tradition that former presidents not criticise incumbents.

“But you know, Donald Trump has shredded almost every democratic norm there is in America”.

Cody talks about shaping Obama’s key speeches, the successes and failures of the Obama administration and his insights into the apparent chaos of Trump’s White House and his Twitter diplomacy.