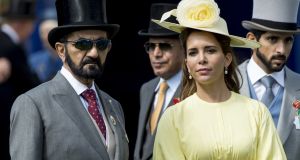 A high-profile royal dispute that pits the billionaire ruler of Dubai against his wife, a Jordanian princess, is set to resume in a British court this week.

A preliminary hearing in the family division of London’s high court will start on Tuesday and comes after Princess Haya, a half-sister of King Abdullah of Jordan, apparently left Sheikh Mohammed bin Rashid al-Maktoum and moved to the UK.

The case is highly sensitive for the United Arab Emirates as it has thrust the personal life of Sheikh Mohammed, the UAE’s vice-president and prime minister, back into the headlines.

Sheikh Mohammed has a global bloodstock empire, including owning eight farms in Ireland. The sheikh’s racehorses run under the Godolphin banner, an operation that started in 1994.

Godolphin has more than 1,000 horses in training worldwide including with trainers such as Willie McCreery and Michael Halford in Ireland.

The two parties in the legal dispute released a statement this month after a private hearing saying the legal battle related to the welfare of their two children and not divorce or finances. The UAE has not commented on the dispute, insisting it is a private family matter.

People close to Dubai’s leadership said one issue behind the discord in Sheikh Mohammed’s relationship with Princess Haya, his sixth wife, related to the case of Sheikha Latifa. The 33-year-old is the Dubai ruler’s daughter with one of his other wives and has been at the centre of a controversy over claims she tried to escape the restrictive lifestyle allegedly imposed on her in the city state.

Sheikha Latifa was allegedly abducted by Emirati forces from a yacht off the coast of India as she attempted to flee Dubai last year, according to her friends. She has not been seen since an arranged meeting with former president Mary Robinson in December.

Mrs Robinson, also a former UN human rights chief and a friend of Princess Haya, said after that meeting that Sheikha Latifa was “troubled” and “in the loving care of her family”.

The UAE authorities used it to respond to the allegations about Sheikha Latifa’s treatment and issued photos of her with Ms Robinson.

In March last year, a 40-minute video was posted online in which Sheikha Latifa talked about the restrictions on her life, her desire to leave Dubai and how one of her sisters, Shamsa, “ran away” for two months while on holiday in the UK in 2000. “If you are watching this video it’s not such good thing, either I’m dead or I’m in a very, very bad situation,” said Sheikha Latifa. “Soon I’m going to be leaving somehow.”

The legal battle pits two of the UK’s leading family lawyers against each other.

Fiona Shackleton, who has been dubbed the “Steel Magnolia” for her charm and tough negotiating skills and is no stranger to handling royal disputes, is representing Princess Haya.

Baroness Shackleton rose to prominence when she handled British royal Prince Andrew’s split from Sarah Ferguson in 1992. Now at Payne Hicks Beach law firm, Baroness Shackleton went on to become solicitor to Prince Charles during his 1996 divorce from Diana, Princess of Wales.

Sheikh Mohammed will be represented by the equally well-connected Lady Helen Ward, a partner at Stewarts Law.

Lady Helen represented Guy Ritchie, the British film director, in his divorce from Madonna. Other former clients include Andrew Lloyd Webber, the composer, and Bernie Ecclestone, the Formula One tycoon who she represented in the battle over his £2 billion fortune with his former wife.

Sheikh Mohammed’s wealth is founded on his extensive land, property and corporate interests in Dubai, the city that under his leadership has transformed into the Middle East’s dominant trade hub and tourist destination.

But the scrutiny of his private life in London comes amid renewed political and economic challenges at home, where a four-year economic slowdown triggered by lower oil prices has been exacerbated by regional geopolitical tensions.

The legal dispute could also be awkward for Jordan’s King Abdullah, whose government relies on financial support from the UAE and its ally, Saudi Arabia, as it grapples with a lacklustre economy and rising social pressures.

Princess Haya, who was educated in Britain, shares Sheikh Mohammed’s passion for horses and was a two-term president of the International Federation for Equestrian Sports. She competed in show jumping at the Sydney Olympics in 2000 and has served on the International Olympic Committee. – Copyright The Financial Times Limited 2019