Sheikha Latifa in ‘the loving care of her family’, says former Irish president 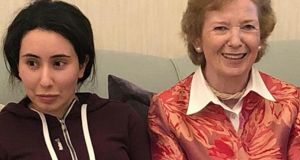 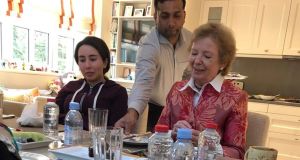 Former president Mary Robinson has described the Emirati princess who went missing earlier this year as a “troubled” and “vulnerable” young woman who has a “serious medical situation” following a meeting with the daughter of Dubai’s leader in the United Arab Emirates earlier this month.

Photographs of Sheikha Latifa bint Mohammed al-Maktoum were released by the princess’s family on Christmas Eve to rebut what they described as “false allegations” that she was taken home against her will. Her father is Sheikh Mohammed bin Rashid Al Maktoum, Dubai’s ruler and the UAE’s prime minister and vice-president.

The photographs show the 33-year-old meeting former United Nations high commissioner for human rights Mary Robinson who says she was invited by the family to meet the princess. The photographs were accompanied by a statement from the government saying the princess was “at home and living with her family in Dubai”.

Friends and supporters say she was forcibly returned to Dubai after fleeing the country earlier this year. The princess had not been seen or heard of since being seized from a yacht some 50km off the Indian coast in March 2018. She had previously released a 40-minute video saying she was imprisoned off and on for several years and abused. Human rights organisations had also raised concerns since here disappearance.

Speaking on the BBC Radio 4 Today Programme , Mrs Robinson said she had met the princess in December following a request by Princess Haya, Sheikha Latifa’s stepmother. Describing the young woman as “vulnerable and troubled”, the former Irish president said Sheikha Latfia regretted making the video as part of a planned escape. She added that the circumstances of the woman’s disappearence and subsequent discovery on board a yacht and the $300 million reward that was offered needed to be examined “immediately”.

Mrs Robinson, who met with the princess over lunch, said she was now in the care of her family and a “very likeable young woman” but clearly needed the medical care she is receiving. The lunch was also attended by Princess Haya and some younger members of the family, she said.

Following the meeting, Mrs Robinson said she sent a report to the current UN high commissioner for human rights Michelle Bachelet and also spoke over the phone with former high commissioner Zeid Ra’ad AL Hussein. She added that she had also exchanged emails with Kenneth Roth, chief executive of Human Rights Watch, regarding the situation.

She said she was happy for the photographs of the meeting to be publicly released so it could be understood that Sheikha Latifa was in “the loving care of her family”.

“You have to bear in mind that this is a troubled young woman who has a serious medical situation. She’s receiving psychiatric care and they (her family) don’t want her to endure any more publicity.”