US director of national intelligence to step down in August 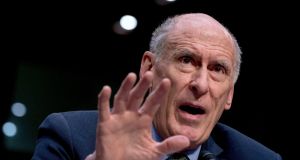 US director of national intelligence Dan Coats speaks at a Senate Select Committee on Intelligence in Washington in 2018. Photograph: AP

US director of national intelligence Dan Coats is to leave his job next month after a two-year tenure marked by Donald Trump’s regular clashes with intelligence officials.

Mr Trump tweeted on Sunday that the nation’s top intelligence official would step aside on August 15th and that he would nominate a Texas congressman, Republican John Ratcliffe, to the post.

Mr Coats frequently appeared out of step with Mr Trump and disclosed to prosecutors how he was urged by the president to publicly deny any link between Russia and the Trump campaign.

The frayed relationship reflected broader divisions between the president and the government’s intelligence agencies.

Mr Trump has been sceptical of the nation’s intelligence agencies, which provoked his ire by concluding that Russia interfered in the 2016 presidential election with the goal of getting him elected.

A former Republican senator from Indiana, Mr Coats was appointed director of national intelligence in March 2017, becoming the fifth person to hold the post since it was created in the wake of 9/11 to oversee and coordinate the nation’s 17 intelligence agencies.

Mr Coats had been among the last of the seasoned foreign policy hands in to surround the president after his 2016 victory, of whom the president steadily grew tired as he gained more personal confidence in Oval Office, officials said.

Mr Coats developed a reputation inside the administration for sober presentations to the president of intelligence conclusions that occasionally contradicted Mr Trump’s policy aims.

His departure had been rumoured for months, and intelligence officials had been expecting him to leave before the 2020 presidential campaign season reached its peak.

Mr Trump’s announcement that Mr Coats would be leaving came days after Mr Mueller’s public testimony on his two-year investigation into Russian election interference and potential obstruction of justice by Mr Trump, which officials said both emboldened and infuriated the president.

Mr Coats had been among the least visible of the president’s senior administration officials but, in his limited public appearances, repeatedly seemed at odds with the administration, including about Russia.

For instance, he revealed to Mr Mueller’s investigators how Mr Trump, angry over investigations into links between his campaign and Russia, tried unsuccessfully in March 2017 to get him to make a public statement refuting any connection. – PA