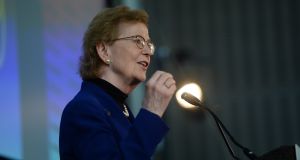 Former president Mary Robinson has said Princess Haya bint al-Hussein, who has fled from Dubai to London, remains a friend of hers.

Mrs Robinson said she has never been friends with the leadership of the United Arab Emirates (UAE) except for Princess Haya, daughter of the late King Hussein of Jordan, and wife of Sheikh Mohammed bin Rashid al-Maktoum, the ruler of Dubai.

The couple are understood to have parted and are embroiled in a formal dispute in the high court in London.

Mrs Robinson was speaking to reporters at the Irish Congress of Trade Unions’ biennial conference in Dublin on Wednesday. Asked if she is still friends with the leadership of the UAE, Mrs Robinson said: “I really have nothing more to say about that. I have never been friends, except with Princess Haya, one friend, who is still my friend.”

The Emirati royal family was last year in the spotlight over the case of Princess Latifa, Sheikh Mohammed’s daughter, who allegedly escaped Dubai and was subsequently seized off the coast of India by commandos and forcibly returned to her home.

Emirati authorities dismissed the allegations over Princess Latifa’s treatment and abduction at the time as fiction, saying that she was “vulnerable to exploitation” and had been kidnapped.

Mrs Robinson was drawn into the controversy when she went to Dubai last December at the request of Princess Haya. Mrs Robinson was photographed with Princess Latifa, who she described as a “troubled” and “vulnerable” young woman who was getting medical attention from her family.

Following the meeting, Mrs Robinson said she sent a report to the current UN high commissioner for human rights Michelle Bachelet and also spoke over the phone with former high commissioner Zeid Ra’ad AL Hussein. She said she had also exchanged emails with Kenneth Roth, chief executive of Human Rights Watch, regarding the situation.

She said at the time she was happy for the photographs of the meeting to be publicly released so it could be understood that Latifa was in “the loving care of her family”.

“You have to bear in mind that this is a troubled young woman who has a serious medical situation. She’s receiving psychiatric care and they (her family) don’t want her to endure any more publicity,” Mrs Robinson said.

Princess Haya spent time in Ireland in the 1990s, training with the late Paul Darragh, one of the country’s best known show-jumpers. She said her time in Ireland was “some of the happiest days of my life”.

“I really, really enjoyed it there. I trained in Co Meath in Ireland with Paul Darragh in the early 1990s and coming through to 1997. My late father sent me there because I had a dream to be a professional athlete and to represent my country,” Princess Haya told RTÉ Radio’s Marian Finucane show last January.

“I spent the most formative years of my life in Ireland. I love the emerald isle, I love the people, I have many, many friends and such good memories.”

Princess Haya said her father King Hussein of Jordan always said Mrs Robinson “was a person who really held precious what he believed in and what he taught me to live by”. She said said she invited the former president to Dubai to seek her counsel in relation to Princess Latifa last December adding “it mattered deeply to me”.

She added she was “really, really very sorry that my actions have led to the criticism of a person that I so deeply respect and admire” in Mrs Robinson. The princess said she had called the former president after seeing correspondence from the UN high commission for human rights seeking evidence that Latifa was alive.

“Being asked to prove that someone we love, that I love, is simply alive, is absurd,” Princess Haya said.