New Approach, the world’s top-rated three-year-old in 2008, raced in the colours of Princess Haya 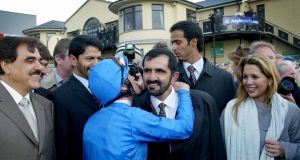 Jockey Frankie Dettori, Sheikh Mohammed and Princes Haya after winning the Boylesports Irish 2000 Guineas at the Curragh in May 2005. Photograph: Inpho/Morgan Treacy

The ruler of Dubai’s racehorses run under the Godolphin banner, an operation started in 1994 and which enjoyed immediate success when the Frankie Dettori ridden Balanchine won the Irish Derby that year.

Godolphin currently have over 1,000 horses in training worldwide including with trainers such as Willie McCreery and Michael Halford in Ireland.

Sheikh Mohammed has had a lengthy association with Co Carlow-based trainer Jim Bolger over the last decade and a half. Bolger sold the subsequent 2008 Epsom Derby winner New Approach to him.

New Approach was the world’s top-rated three-year-old in 2008 and raced in the colours of Princess Haya.

The Sheikh owns eight farms in Ireland, including the 1,500 acre Kildangan Stud in Co Kildare which is a central part of his breeding empire operating under the Darley banner.

Kildangan is home to Darley’s 14 Irish-based stallions, including Teofilo and Exceed And Excel, and can accommodate more than 400 horses in all. There are 250 people employed there.

Godolphin is a shareholder and one of the original investors in Curragh Ltd, initially contributing €5 million towards the €81 million revamp of Irish racing’s most famous racecourse.

Between Godolphin, and when his horses ran under his own name, Sheikh Mohammed has won 17 Irish classics at the Curragh. They include four wins in the Irish Derby, the first of which was 30 years ago with Old Vic.

Serena Williams beats sister Venus at Top Seed Open 09:42
Australia’s limited overs tour of England gets the all clear 09:21
Rugby to return in England with rucking but no hugging 08:15
First pro rugby player in Ireland tests positive for Covid-19; Leipzig into final four 07:44
Prospect of magic number proves elusive at Wyndham Championship 07:08
Here is your handy guide to sport on television this week