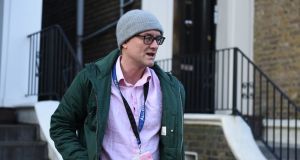 Downing Street has come under intense pressure to explain how an adviser who argued that intelligence is linked to race came to work at No 10, amid fresh questions about chief aide Dominic Cumming’s drive to employ “misfits and weirdos” to work under him.

A day after Andrew Sabisky said he would step down as a “contractor” to Downing Street due to the furore about his views, Labour wrote to British prime minister Boris Johnson asking him to explain how the appointment was made, and whether he agreed with Mr Sabisky’s views.

Separately, a Labour MP wrote to the head of the British civil service, Mark Sedwill, requesting information on who hired Mr Sabisky and whether he was vetted.

Mr Cummings on Tuesday hit back at “political pundits” who had questioned Mr Sabisky’s appointment.

Asked whether he regretted the hiring of a self-styled “superforecaster” Andrew Sabisky, Dominic Cummings told reporters: “Read Philip Tetlock’s Superforecasting instead of political pundits who don’t know what they are talking about.”

Downing Street has so far declined to give even basic details of Mr Sabisky’s work, or how he was recruited. Officials also refused to comment on the status of two other so-called “super-forecasters” pictured with him outside No 10 Downing Street in January.

#KayBurley - Are you comfortable with Andrew Sabisky, who openly believes in eugenics, working in Downing Street?

George Eustice(Environment Sec) - I'm not going to get drawn on that... that's a matter for Dominic Cummings. pic.twitter.com/MuZmrPE91R

It is good that Andrew Sabisky has quit. Eugenics has no place in government. However, by refusing to condemn these views, Boris Johnson revealed so much about his own character. https://t.co/576DCbMccS

The photograph was tweeted by Michael Story, co-founder of a forecasting startup called Maby, who has now made his Twitter account private. It showed Mr Story and Mr Sabisky with the other founder of Maby, Thomas Liptay.

Mr Sabisky stepped down following increasing criticism from Conservatives and opposition politicians after details emerged of his views on subjects ranging from black people’s IQs to using brain-enhancing drugs on children, and whether benefits claimants should be encouraged to have fewer children.

Labour Party chairman Ian Lavery wrote to Mr Johnson asking about how Mr Sabisky was hired, whether he was vetted, and if the prime minister approved the process. Mr Lavery also asked whether Mr Johnson agreed with Mr Sabisky’s views on race and intelligence, and other subjects. Downing Street officials refused to comment on this on Monday.

The Scottish National Party also demanded that Mr Johnson say whether Mr Sabisky was vetted, arguing that the prime minister had “serious questions to answer” over the appointment.

Mr Sabisky appears to have been the first hire in response to a rambling blog post in the new year by Mr Cummings, Mr Johnson’s chief adviser, calling for “weirdos and misfits with odd skills” to apply for new jobs within No 10.

As news of Mr Sabisky’s role emerged, so did details of views he had expounded energetically over years of writing, blogging and social media comments, much of it based around a belief in genetics as the main driver for people’s life chances.

This included arguing that differences in intelligence and ability between races and social classes are largely hereditary, and thus there was little point running positive discrimination schemes, or early intervention programmes.

It prompted a handful of Conservative MPs to speak out publicly against Mr Sabisks.

Downing Street had appeared resolute in sticking by Mr Sabisky throughout Monday, but he abruptly left that evening amid widespread reports that he had been ordered to step down. – Guardian/Reuters