How Amsterdam is tackling its red-light district problems 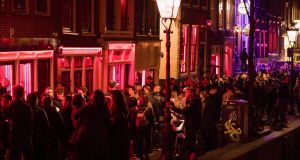 In a tiny city that attracts 17.4 million tourists a year, there’s rarely a hour when De Wallen is quiet. Photograph: Peter Dejong/AP Photo

If there was a single turning point that convinced Amsterdam’s authorities that the price of mass tourism was becoming too high to pay, it was when the director of the Rijksmuseum – one of the city’s most famous cultural institutions – let rip a few years ago in a letter to a national newspaper.

In an outburst as remarkable for its honesty as for its naivete, Wim Pijbes described the heart of the capital as “dirty” and “sleazy”, with “rubbish bags being torn open by gulls and rats” and “an anything-goes atmosphere” typified by drugs and prostitution.

Pijbes received his fair share of abuse for his views, of course, especially on social media, and mainly, his supporters pointed out, from people who did not live in central Amsterdam – which has a population of just 85,000 that can swell to 200,000 on any busy summer’s day.

To that extent his letter performed a long-overdue service: pointing up the difference between the city “old Amsterdammers” were expected to accept for the good of tourism – and the one whose “liveability” well-heeled expats ranked a creditable seventh out of 480 worldwide just this week.

But, in fact, Pijbes – an art historian who oversaw the refurbishment of the Rijksmuseum and its reopening in 2013 to international critical acclaim – wasn’t the first to call a spade a spade.

Boudewijn Oranje, chair of Amsterdam’s borough council, had made much the same point on behalf of the city’s disgruntled residents, many of whom felt they had been abandoned in a largely unregulated playground run by the powerful Dutch sex and drugs industries.

“Lots of tourists see this city as a sort of adult Disneyland,” Oranje told one local reporter. “They come for stag and hen parties and wander the streets and canals intoxicated, in hats shaped like enormous penises. That can cause problems.”

Fast forward five or six years and Amsterdam – having denied that things were anywhere near as bad as either Pijbes or Orange painted them – is finally taking steps to clean up the city centre, and particularly the red-light district, known locally by its medieval name, De Wallen.

Since January, organised city tours – of which there are estimated to be about 115 – have been banned from the network of ancient laneways that make up De Wallen, where scores of regulated, registered, and totally legal prostitutes run their businesses from individual “windows”.

In a tiny city that attracts 17.4 million tourists a year, there’s rarely a hour when De Wallen is quiet. But when I took a casual look last month, the tours – which, by virtue of the fact that they’re groups, provide almost no business – were certainly noticeable by their absence in the cramped alleys.

Last weekend, the city council voted to go further and extend tighter regulations to other red-light areas outside De Wallen, where organised groups of more than 15 tourists will be banned, starting in April with a six-week “warning period”.

Initial penalties are mild, rising to tough. For the first offence after the warning period, there’s a €190 fine and the tour will be disbanded on the spot. For the second, the company’s permit will be withdrawn temporarily. For the third, there’s a permanent ban along with fines of €2,500-€7,500.

With the first steps now taken, Femke Halsema of GreenLeft, Amsterdam’s first female mayor, has even suggested that the city may have to consider a future without a red-light district.

“Times have changed,” says Halsema. “There was a time when sailors would come home from months at sea and it was taken for granted they would visit a ‘stout’ Dutch woman.

“Now the women are predominantly foreign. We don’t know how many of them ended up here being pointed at, laughed at and photographed by tourists. But the fact is that human trafficking is taking place in the oldest part of our city.”

Halsema’s plan is being opposed by a female sex workers’ lobby group, Red Light United, which claims that 90 per cent of the 170 or so prostitutes want to stay in De Wallen because their customers know where to find them.

The sex industry is not the only part of old Amsterdam that’s facing imminent change.

Halsema also has plans to make the city’s “coffee shops”, where cannabis can be consumed legally, less of a draw for tourists after a recent survey found they’re most attractive to males aged 15-35 – the very demographic most likely to cause nuisance while wandering the streets in penis-shaped hats.

Around one-third of those surveyed said they would visit Amsterdam less frequently if they couldn’t use the city’s coffee shops, with 11 per cent saying they wouldn’t return at all.

The question for the city council is simple: Would that be good or bad?