Iranian election looms amid woes over US sanctions 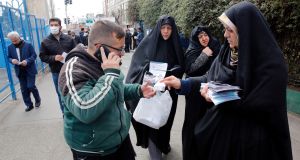 Iran is set to go to the polls on February 21st to elect a new parliament at a time of soaring tensions with the US and rising economic distress for most Iranians due to US sanctions.

Hardliners are likely to secure a majority in the 290-member assembly, or majlis, since more than half of the 14,000 people, a majority them reformists and moderates, who applied to run were banned by the Guardian Council, the body vetting candidates.

Reformist president Hassan Rouhani condemned the disqualifications, particularly 90 of outgoing majlis members after 247 registered to stand for re-election. He complained, “This is not an election,” he said, pointing out that most of the approved candidates belong to one party. “People need diversity.”

In response to this challenge, Rouhani’s government is preparing a draft law for a referendum proposing limitations on the powers of the council. This 12-member body comprising jurists and lawyers ensures that proposed legislation does not contradict religious laws or Iran’s constitution, and oversees elections.

Rouhani’s initiative comes at a time supreme leader Ayatollah Ali Khamenei, the final arbiter of national policy, faces widespread criticism for the regime’s failure to meet the demands of the people. The proposed referendum could be ruled out by the ayatollah and the council.

Despite the row over majlis candidates, Rouhani has called on voters to go to the polls to demonstrate to the Trump administration that Iranians continue to support the 41-year-old Shia fundamentalist regime, which Washington’s hawks seek to topple.

Khamenei, his clerical entourage, conservatives and Republican Guard seek to strengthen their grip on power. The moderate reform camp has lost public confidence since the US withdrew from the 2015 accord, negotiated during Rouhani’s watch, providing for strict limitations on Iran’s nuclear programme in exchange for the easing of punitive sanctions.

Following implementation of the nuclear deal in early 2016, the Iranian economy began to recuperate from decades of sanctions. Recovery was reversed in mid-2018 when the US reimposed and ramped up the sanctions regime. Oil, gas and other exports were cut by half, essential imports were severely reduced, and Iran lost access to financial markets. The value of the Iranian currency plunged.

The US policy of “maximum pressure” has prompted widespread demonstrations against the high cost of living, corruption, lack of jobs and clerical rule.

Tehran has responded by cracking down hard on domestic protests and demonstrating it can retaliate against the US by mounting carefully calibrated strikes on vulnerable Gulf shipping and Saudi oil facilities. Pro-Iranian Iraqi militias have rocketed bases hosting US troops in that country.

Tensions spiked in January when the US assassinated elite Quds Force commander Qassem Soleimani near Baghdad. As he was a popular figure at home, Iranians replied with countrywide, mass patriotic demonstrations.

However, they soon returned to the streets to protest over the government’s belated admission that the military had accidentally shot down a Ukrainian airliner, killing 176 passengers, many of them Iranians, and crew. Failure to own up promptly boosted popular mistrust of the regime.