US financier Jeffrey Epstein charged with abusing ‘dozens’ of girls 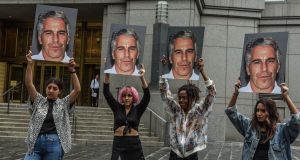 Money manager Jeffrey Epstein has been accused of sexually abusing “dozens” of underage girls at his homes in New York and Florida in a two-count federal indictment unsealed on Monday.

The charges in New York come just over a decade after the registered sex offender avoided a lengthy jail sentence for similar offences in a deal struck by Alexander Acosta, Donald Trump’s labour secretary who was then the US attorney in Miami.

Mr Epstein (66), a one-time friend of Mr Trump, Bill Clinton, and Prince Andrew, the Duke of York, was arrested on Saturday and was due to make an initial appearance in court in New York on Monday.

The Manhattan US attorney’s office alleged that Mr Epstein had created “a vast network of underage victims for him to sexually exploit”, including girls as young as 14.

“The alleged behaviour shocks the conscience,” said Geoffrey Berman, US attorney for the southern district of New York, who said Mr Epstein’s victims “deserve their day in court”.

“We are proud to be standing up for them by bringing this indictment,” said Mr Berman, who pointed to a picture of Mr Epstein and called on other alleged victims to come forward with information.

The indictment accused him of recruiting victims to give him “massages” where he would sexually abuse them and then pay them hundreds of dollars in cash afterwards. He also allegedly paid some victims to recruit other minors.

“In so doing, Epstein maintained a steady supply of new victims to exploit,” the indictment alleged, claiming that some of his victims “expressly told him their age”.

The alleged crimes occurred between 2002 and 2005 in the New York City borough of Manhattan and Palm Beach, Florida. Mr Epstein is charged with sex trafficking of minors and conspiracy to commit sex trafficking of minors. He faces a maximum of 45 years in prison. The US attorney’s office is also seeking the forfeiture of Mr Epstein’s New York mansion, located on the Upper East Side.

Mr Epstein previously served 13 months in a Florida county jail as part of a 2008 plea deal, which allowed him to avoid federal charges by pleading guilty to state prostitution offences.

In February, a federal judge said Mr Acosta had broken the law in negotiating the deal by failing to inform Mr Epstein’s victims. The judge, Kenneth Marra, said in his ruling that Mr Epstein had “sexually abused more than 30 minor girls” between 1997 and 2007.

Mr Berman said the non-prosecution agreement struck by Mr Acosta only bound the US attorney’s office in Miami and did not prevent his office from bringing charges. A department of labor spokeswoman said on Monday: “We will defer to DOJ [the Department of Justice] for comment”.

Mr Epstein was arrested on Saturday at Teterboro airport in New Jersey after flying in from Paris, said Mr Berman. In a raid of Mr Epstein’s New York mansion that day, agents found “nude photographs of what appeared to be underage girls,” he added.

Prosecutors said in their motion to deny bail that Mr Epstein was “extraordinarily wealthy”, owning properties in New York, Palm Beach, New Mexico and Paris, as well as a private island in the US Virgin Islands.

They said his Manhattan townhouse was valued at more than $77 million and his Palm Beach resort at more than $12 million. Prosecutors said he had three active US passports, two private jets and 15 motor vehicles. “His potential avenues of flight from justice are practically limitless,” the motion claimed.

Before his jailing in 2008, Mr Epstein had long rubbed shoulders with powerful figures in the US and the UK, despite a lingering mystery over the source of his wealth. A former Bear Stearns trader, he later said that he managed money for billionaires, including Les Wexner, the founder of L Brands, which owns Victoria’s Secret business.

He was friends with Mr Trump, who in 2002 told New York magazine that Mr Epstein was a “terrific guy. He’s a lot of fun to be with.”

“It is even said that he likes beautiful women as much as I do, and many of them are on the younger side. No doubt about it – Jeffrey enjoys his social life,” Mr Trump told the magazine.

Mr Clinton, the former US president, spent a week with Mr Epstein touring Africa on his Boeing 727 jet in 2002. Also along for the trip were actors Kevin Spacey and Chris Tucker, billionaire venture capitalist Ron Burkle, and Casey Wasserman, the sports and marketing executive. Mr Clinton later said the trip was to support democratisation, civil society and programmes to fight HIV.

Ghislaine Maxwell, daughter of Robert Maxwell and a longtime companion of Mr Epstein, has been accused of helping him procure young women, which she has vociferously denied.

A federal judge recently ordered the unsealing of thousands of pages of records in a libel case brought against Ms Maxwell by Virginia Robert Guiffre, an alleged victim of Mr Epstein.

William Sweeney, assistant director in charge of the FBI’s New York office, said on Monday that the bureau’s job was to put “predators” behind bars, regardless of their “power, wealth or perceived connections”.

Paul Cassell, an attorney who represents several of Mr Epstein’s alleged victims, said the indictment on Monday “only proves that Epstein should have been charged by federal prosecutors twelve years ago in Florida”.

“With his wealth and political connections, Epstein was able to buy more than a decade of delay in facing justice – but fortunately he wasn’t able to postpone justice forever,” he said in an emailed statement.

The indictment against Mr Epstein cites three unnamed employees, as well as “associates”, who helped him recruit victims and “facilitated his conduct”.

When Mr Epstein flew from New York to Palm Beach on his private jet, “an employee or associate would ensure that minor victims were available for encounters upon his arrival in Florida,” the indictment alleged.

Attorneys for Mr Epstein, Martin Weinberg and Jack Goldberger, did not immediately return an emailed request for comment.

The investigation by the Manhattan US attorney’s public corruption unit came after The Miami Herald renewed interest in the case last year in a series of articles that sparked accusations of extraordinary leniency on the part of Mr Acosta.

At the time, Mr Epstein was represented by high-profile attorneys including Alan Dershowitz, the Harvard law professor, and Kenneth Starr, the former independent counsel who investigated Mr Clinton.

Ben Sasse, the Republican senator from Nebraska, called in December for a justice department investigation into the “sweetheart deal”, arguing that Mr Epstein had received “a pathetically soft sentence”.

Mr Berman on Monday gave a nod to the Miami Herald’s work, noting that his office was “assisted by some excellent investigative journalism”. – Copyright The Financial Times Limited 2019