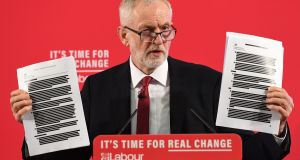 Labour Party leader Jeremy Corbyn holds up redacted documents of secret talks between the UK and US governments in London on Wednesday. Photograph: Andy Rain/EPA

Jeremy Corbyn and Boris Johnson have clashed over the future of the National Health Service (NHS) under a trade deal with the United States after Labour published leaked documents from trade talks between London and Washington. Mr Corbyn said the documents, which describe six rounds of talks involving trade officials between July 2017 and July 2019, prove that the NHS would be on the table in any future trade deal.

“We are talking here about secret talks for a deal with Donald Trump after Brexit. A deal that will shape our country’s future. These reports pull back the curtain on the secrecy that’s being plotted for us all, behind closed doors, by the Conservative government. This is what they didn’t want you to know,” the Labour leader said.

The documents report that US officials said they wanted the starting point for negotiations to be full market access with all sectors on the table. The US side raised the issue of drug pricing and the length of patents, although British officials expressed concern about the implications of such proposals for the use of generic drugs in the NHS.

Pharmaceutical companies generally charge higher prices in the US than in Europe, where health services like the NHS use their scale and monopoly power to keep prices low.

“The US said there is a lot of conversation on drug prices and looking at what other countries pay and this is causing angst. There are worries that the US is not getting a good deal in pharmaceutical industries,” according to the documents.

The talks also discussed issues such as food safety standards, with the US side offering to share their talking points on chlorine-washed chicken with their British counterparts.

At a meeting in July this year, officials from the US trade representative’s (USTR) office stated Washington’s preference that Britain should leave the EU without a deal.

“USTR were also clear that the UK-EU situation would be determinative: there would be all to play for in a No Deal situation. But UK commitment to the Customs Union and Single Market would make a UK-US Free Trade Agreement a non-starter,” a British official reported.

US officials also told their British counterparts that Donald Trump would welcome evidence of progress towards a trade deal in the run-up to next November’s presidential election.

The Conservatives played down the significance of the documents and Boris Johnson dismissed Mr Corbyn’s claims about the NHS as nonsense.

“It is a total nonsense, and it is endlessly repeated by the Labour party, that the NHS is somehow up for sale, or going to be negotiated in a trade deal. Nothing could be further from the truth. That will not happen under this government or any Conservative government.

“What you have heard from me today is our commitment to the NHS. And there’s only one reason why the Labour party continues bring this up, which is a total invention. It is because they seek to distract from the great void at the heart of their principle policy at this election, which is about Brexit,” he said.