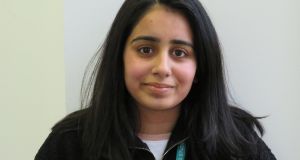 Undecided student voter Muskan Kudhail: ‘We’re such an old country and we’ve always bounced back from everything.’ Photograph: Jennifer O’Connell

This will be “the election of our lives” for Britain’s young people, the UK’s National Union of Students has predicted.

If older voters were crucial in deciding Brexit, it could well be young people who swing the outcome this time. The news that two-thirds of 3.2 million last-minute registrations came from people under 35 is being welcomed as a sorely-needed boost for Jeremy Corbyn’s Labour Party.

The second-year A-level politics students at Dudley Sixth Form College, several of whom will vote for the first time on December 12th, defy the stereotype of disengaged, apathetic young people. They’re studying politics, for a start. They stay informed using sources such as Apple news, Facebook, Twitter, Instagram, Reddit, the Guardian and the BBC. They are passionate about their beliefs. And they’re not exactly filled with hope for the future.

“I’m quite pessimistic,” says Emerson Hanslip. He feels Britain lacks a sense of purpose, “and something we can all stand united on. We’ve become really weak as a country.”

Britain “is going through an identity crisis”, says Liam Evans, a member of the Young Conservatives.

Will McLeod is similarly anxious. This election could bring “some chance of redemption” if Brexit was reversed “or the Conservatives managed to pull off a miracle and get Brexit done well”.

First time voter Braden Burgess, who is giving his vote to Labour, is even less sanguine. “I feel like we’re heading towards turmoil. We’ve Brexit going on. [We have] growing wealth inequality. The threat of climate change. I feel like we’re just going to be torn apart and the system as we know it isn’t working.”

Muskan Kudhail, who hasn’t yet made up her mind what to do with her first vote, does see cause for optimism. “I feel like there’s only one way and that’s up. We’re such an old country and we’ve always bounced back from everything.”

They may all be young, but despite media perceptions about young voters, they’re not all fans of Corbyn. In a show of hands, nobody in the class of nine in this ultra-marginal constituency would vote for the Liberal Democrats or the Brexit Party; two support the Greens; two will vote Labour, and four support the Conservatives. Kudhail is the only undecided voter.

Madelene Priestley knows exactly what she’s going to do with her first vote. She’s voting Labour because of Jeremy Corbyn. “I just trust him with this country. I feel like he’s a breath of fresh air. Everything he has proposed – and people are saying it’s radical – but it’s just giving back to us what the Tories have taken away. [He’s] making sure the NHS is not being sold off [he’s] and giving us a welfare system, so that if someone loses a job, they’re not going to fall through the net.”

Burgess – who comes from a Conservative family but will vote Labour – worries that Corbyn’s “neutral stance on Brexit” could damage the party. “That’s the only thing that’s going to stop them getting into power, because I think otherwise Corbyn has a brilliant manifesto. There is a lot of support for him. Maybe not amongst older people, maybe not round here, but Corbyn does have a lot of fans.”

Their strong pro-Labour views lead to sometimes heated discussions with their classmate, Jack Howen, who is also bucking the family tradition and supporting the Conservatives. Boris Johnson, he says, “has got a very marmite personality. You either love it or you hate it. But, you know, he’s been trying to get policy through parliament, he’s trying to get Brexit done, he’s trying to get these extra police that he’s promising”.

And people like the prime minister, he adds. “He seems like a guy you’d go down to the pub with. I mean, he’s constantly eating fish and chips. He was educated at Eton, yet he feels like someone you’d meet on the street, someone you’d want to represent you.”

This may be “the Brexit election” but Brexit, it quickly becomes clear, is not high on the agenda of these young people. The issues they care most about include education, welfare, climate change, wealth inequality, policing and taxation.

Student debt is the most pressing issue for first-time voter, Anna Yau. She thinks she’ll vote Conservative, because of her dislike of Corbyn. Kasandra Katkaukaite, who won’t be old enough to vote this time round, plans to vote Green in the future, because of climate change.

Policing is the most urgent issue for others, including Hanslip, who hosts workshops about knife crime, which has risen by 85 per cent since 2012 in the West Midlands.

“In Dudley, we’re actually the safest borough in the West Midlands, but centres like Birmingham and Coventry have a serious crime problem,” he says. “Coventry was recently named one of the most unsafe places to live in Europe, ahead of Sarajevo. ” He fears the divisions in British society are feeding into the crime issue.

In this class of nine A-Level students, it is the Johnson-supporting Howen who is most vocally optimistic about the future. “There’s a company in Wales making jeans again. That’s amazing. No matter what happens, I can see jobs coming back to Britain. I can see progress being made in the world, and traditional industry coming back.”

* Jennifer O’Connell is reporting from two of Britain’s most marginal constituencies, Dudley North and Newcastle-under-Lyme this week, and will return again before the election to see if the mood on the ground has changed.