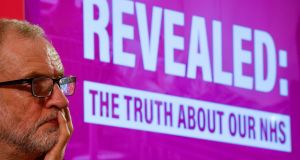 Labour has obtained official documents showing the US is demanding that the NHS will be “on the table” in talks on a post-Brexit trade deal, Jeremy Corbyn has said.

The Labour leader said the uncensored papers gave the lie to Boris Johnson’s claims that the NHS would not be part of any trade talks.

“The uncensored documents leave Boris Johnson’s denials in absolute tatters,” he told a news conference in London. “We have now got evidence that under Boris Johnson the NHS is on the table and will be up for sale. He tried to cover it up in a secret agenda and today it has been exposed.”

Mr Corbyn said the 451 pages of documents covered six rounds of talks from July 2017 to “just a few months ago”. He said the meetings took place in Washington and London.

“We are talking here about secret talks for a deal with Donald Trump after Brexit,” he said.

On medicine pricing, he said discussions had already been concluded between the two sides on lengthening patents. “Longer patents can only mean one thing – more expensive drugs. Lives will be put at risk as a result of this,” he said.

“One of the reasons for US drug prices being on average 250 per cent of those here is a patent regime rigged for the big pharmaceutical companies.”

The NHS announcement came as the party battled to bring the focus back on to safer ground, after a day that saw renewed criticism of Mr Corbyn’s handling of antisemitism.

The Labour leader avoided apologising to Jewish communities in a TV interview with the journalist Andrew Neil following an allegation by the chief rabbi, Ephraim Mirvis, that he had let the poison of antisemitism take root in the party.

Mr Corbyn had previously highlighted heavily redacted documents, obtained by Labour campaigners, relating to trade talks between the US and the UK. It is understood that the party obtained unredacted versions in the last couple of days.

“If you look at the readout of the second meeting, on page 51, UK officials report that ‘patent issues’ around ‘NHS access to generic drugs will be a key consideration’ in talks,” said Mr Corbyn.

“US officials have ‘pushed hard’, the report says, for longer patents for US drug companies.

“You can also see on page 132 of the report of the fourth meeting, where drug patents are being discussed, that officials are ready to ‘exchange text’ which is trade-negotiator-speak for it being at a very advanced stage. And they say they are ready to, I quote, ‘really take significant further steps’.”

He added: “Let’s be frank, the US is not going to negotiate to sell its own medicines for less.” – Guardian