From anti-Semitism in Labour to the Tories’ lurch to the right, the outlook is dismal

In a BBC interview Jeremy Corbyn repeatedly refused to apologise to the British Jewish community over anti-Semitism claims. It followed Britain's chief rabbi saying Corbyn was unfit to be PM for failing to stem anti-Semitism within his party. 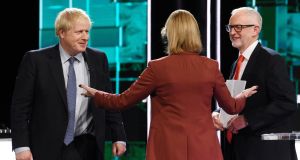 On Tuesday Labour endured its worst day of this election so far – one day after the chief rabbi of Great Britain and Northern Ireland intervened in the election, to ask: “What will become of Jews and Judaism in Britain if the Labour Party forms the next government?” Jeremy Corbyn was skewered on the BBC over the anti-Semitism scandal that has mired his party for the past three years, and the duration of his leadership.

In this election the choice goes beyond policy. Whatever you might make of the radical nationalisation project, or blueprints for solving the housing crisis, or a commitment to hold a second referendum, the longer Corbyn has been in at the helm the harder it has become to ignore the rot that has set in to Labour.

This is a party that elected a Jewish leader less than 10 years ago in Ed Miliband. And now it is – unprecedentedly – being investigated by the Equality and Human Rights Commission over institutional anti-Semitism. It’s a party whose leader has been long associated with a group of Holocaust deniers. And a party that – as declared by prominent Jewish newspapers in the UK – poses an “existential threat” to the Jewish community.

But most crucially the anti-Semitism crisis that has taken hold of Labour is not a product of a few bad apples – every party has them – rather it seems sanctioned from the front bench. That 80 per cent of British Jews believe Corbyn to be an anti-Semite is remarkable. That he refused to apologise for any of this when speaking to Andrew Neil in the most remarkable political interview of the year is astonishing.

And the response to the chief rabbi’s intervention has not been wholesale support of the Jewish community. Many Labour supporters have dismissed Ephraim Mirvis’s intervention as a bid to re-elect a Conservative government; and one of Labour’s most prominent campaigners, Guardian journalist Owen Jones, took to social media to declare it “a baseless and disgraceful smear to say that the Labour leadership is anti-Semitic”.

Even the shadow foreign secretary Emily Thornberry – one of the last bastions of reason on Labour’s front bench, since the departure of Tom Watson – was comfortable dismissing the chief rabbi as “wrong” on his assertion Corbyn was anti-Semitic. “I know Jeremy Corbyn very well. I don’t agree that he is anti-Semitic. I just don’t agree with it,” Thornberry said.

But rather than taking a cue from Thornberry or Jones on whether Corbyn is anti-Semitic or not, the intervention of the chief rabbi, an investigation from the ECHR, and the innumerable allegations of anti-Semitism facing Labour ought to be enough to prove that Labour – in its current incarnation – is not suited for No 10. And no plan to renationalise the railways should supersede that.

The Tories, then – so far benefiting from Corbyn’s sheer uselessness as a leader – will probably win this election. But that means electing a party that on Wednesday was accused by the Muslim Council of Britain of “denial, dismissal and deceit” over Islamophobia. And a party led by Boris Johnson, who still refuses to apologise for likening women wearing burkas to “bank robbers” and letterboxes”.

While Labour is rightly being held to account for its endemic anti-Semitism, that the first female Muslim cabinet minister, and now Tory peer, Sayeeda Warsi has likened being a Muslim in the Conservative party to being in an “abusive relationship” seems to have escaped the notice of many.

Electing the Conservatives, too, means supporting a party no longer of Ken Clarke and Nicholas Soames, Nick Boles or Philip Hammond. But the party of Priti Patel, who once famously suggested threatening Ireland with “food shortages” as leverage during Brexit talks; the party of Jacob Rees-Mogg, who lolls about on the front bench of the Commons in little but naked contempt for those sitting opposite; and the party of Steve Baker, who said he would sooner bulldoze parliament than leave the European Union on any terms other than a no-deal Brexit.

And it means voting for a Conservative Party so squeezed by Nigel Farage on one side and the Liberal Democrats on the other that it has evolved into the Brexit Party in all but name, bearing the claims it can negotiate a trade deal with the European Union in less than a year, followed by a likely breakdown in those negotiations and either a no-deal in 2020 or years more torment and instability.

For a voter who cannot countenance endorsing Corbyn’s premiership, and who cannot easily cast aside the legion of failings of Boris Johnson’s version of the Conservative Party, and who are plagued with anxiety over what his Brexit plans might hold, there is no good choice, and no obvious way through this election.

On December 13th one of these men is likely to get the keys to No 10. But the choice that faces voters on polling day is a dismal one.

1 If you are young and live outside Dublin you could be in trouble
2 Patrick Freyne: You endearingly sentimental sociopath, I’ve just the show for you!
3 Ruth Negga: ‘People who say they don’t consider skin colour... are you f**king blind?’
4 Bobby Storey: The IRA's planner and enforcer who stayed in the shadows
5 Coronavirus claims one more life while 11 new cases reported in Republic
Real news has value SUBSCRIBE