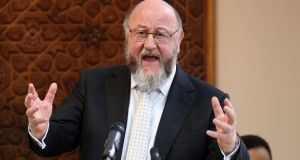 Chief rabbi Ephraim Mirvis who, in an article for The Times, The Chief Rabbi has warned that the soul of the UK is at stake if Labour gain power in the general election. Photograph: Jonathan Brady/PA Wire

Jeremy Corbyn will launch Labour’s race and faith manifesto today, trumpeting his party’s commitment to promoting equality and confronting discrimination on the basis of religion or ethnicity. But Corbyn’s record on racism is under a harsher spotlight this morning after an unprecedented intervention in the election by Britain’s chief rabbi, Ephraim Mirvis. Writing in The Times he says the Labour leader’s handling of anti-Semitism allegations makes him unfit for high office and warns that “the very soul of our nation” is at stake on December 12th.

“How far is too far? How complicit in prejudice would a leader of Her Majesty’s opposition have to be to be considered unfit for office? Would associations with those who have incited hatred against Jews be enough? Would describing as “friends” those who endorse the murder of Jews be enough? It seems not,” he writes.

“It is not my place to tell any person how they should vote. I regret being in this situation at all. I simply pose the question: What will the result of this election say about the moral compass of our country?”

Labour disputes the chief rabbi’s assertion that there are at least 130 outstanding cases of alleged anti-Semitism before the party and thousands more that have been reported but remain unresolved. But Mirvis says the party leadership has always failed to understand that this is not simply about a failure of procedure which can be remedied with more staff and new processes. “It is a failure to see this as a human problem rather than a political one. It is a failure of culture. It is a failure of leadership. A new poison – sanctioned from the top – has taken root in the Labour Party,” he says.

Labour insists that Corbyn is a lifelong campaigner against anti-Semitism who is determined to root it out of his party. But party canvassers report that the issue is coming up on the doorsteps and that some voters associate their leader with anti-Semitism. Corbyn has two opportunities to address the issue today: first at his race and faith manifesto launch, and later when he will be interviewed by Andrew Neil. He must know that, after the chief rabbi’s intervention, he needs to make a big and persuasive move to convince Britain’s Jews that they have nothing to fear from a Labour government.

Jennifer O’Connell in Dudley North, a key marginal in the West Midlands

The Irish Times view on the manifestos

“Both as majority governments pose a risk. It’s just that the chances I think of Labour doing that are — if the polls are right – negligible” – Tony Blair calls for a hung parliament.