Venice is being lost to rising waters and depopulation

Europe Letter: The 10 highest tides in the city’s history have come in the past 20 years 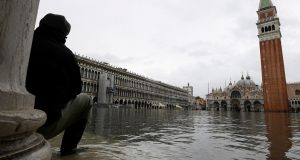 For Simone Tagliapietra, climate change is personal. Yes, climate change is about disappearing islands in the Pacific, the desertification of Africa, hunger and melting polar ice. But in the heart of Europe it is also killing the place he loves most, his birthplace, Venice. “I feel devastated,” he says of the latest four consecutive acqua alta (high -water) floodings.

Writing for Brussels think tank Bruegel after the city suffered the second-worst flooding in its history 10 days ago, and the worst since 1872, the professor of climate and energy science cites the Russian poet and essayist Joseph Brodsky’s description of it as “the greatest masterpiece our species produced”.

We are losing Venice to rising waters, as it sinks into the mud of the bay by a millimetre a year while record tides become the norm, and to its inexorable depopulation in the face of touristification – 36 million visitors a year.

A thousand Venetians leave for good every year – the population of the city is down to about 55,000, from 175,000 in the postwar period. About half who remain are 65 or older. So many have left, it is said, that it will be difficult to find the electricians, plumbers and carpenters needed to repair the damage.

The floods affected 85 per cent of buildings in the city and seriously damaged half of its 120 churches.

A living city, the quality that distinguishes Venice most from other great pillars of human achievement such as the pyramids or Machu Picchu, is metamorphising into a museum as it slowly drowns.

For me, the vaporetti chugging through the Grand Canal on a rainy day, the secret cells up in the roof of the Doge’s Palace from which Giacomo Casanova notoriously escaped, the palace’s spectacular Great Council chamber, the glass blowers of Murano, the backstreet restaurants and the paintings that populate its churches ... these are Brodsky’s masterpiece, Venice in toto.

“Seeing St Mark’s Basilica flooded is like watching a family heirloom drift away downstream,” Tagliapietra writes. “The sight of gondolas being smashed against their moorings, while houses and shops soak, has felt like a faceless assault against the Italian way of life.

“The city is used to dealing with the acqua alta, notably during the winter, when storms prowl the Mediterranean and strong sirocco winds – amplified by the narrow shape of the Adriatic – usher waves towards the northwest side of the sea. But this time has been different. It has been a catastrophe.”

St Mark’s, home to so many stunning golden mosaics, has been flooded only six times in 900 years, four of them in the past two decades. St Mark’s Square now floods more than 60 times a year, up from four times a year in 1900. Tides high enough to flood Venice were once exceptional, but the 10 highest tides in its history have occurred over the past 20 years.

The National Research Centre of Venice (CNR) warns that, without intervention, within 50 years this kind of flooding could occur with nearly every high tide.

The latest acqua alta is a terrible but timely warning to the delegates who gather next week in Madrid for the latest world climate summit, COP25. Its purpose, galvanising a global commitment to climate neutrality by 2030, is more urgent than ever.

“Hundreds of millions have visited Venice to understand our history, but today it’s a monument to the decades ahead,” Tagliapietra warns.

The science is clear, the evidence incontrovertible. Extreme storms normally faced only once every 100 years could hit the world’s coastal cities at least once a year by 2050. By then more than a billion people are likely to be living in the low-lying areas that will be in the path of those storms. “This would amount to having 3,800 Venices underwater at the same time,” he writes.

The issue for Venice and for Italian politics – as it is globally – is a systemic failure of political will and institutions that are incapable of rising to the task.

Rome has been discussing a project to deal with the city’s floodwaters since the 1980s, but MOSE, a deployable underwater dam system blocking the three sea entrances to the lagoon, which has been under construction since 2003, is now 10 years behind schedule at a cost so far of €5.5 billion. The delays reflect both bureaucratic inertia and endemic corruption.

The message for Madrid from the heart of Europe is that the climate crisis is not coming, it is here.