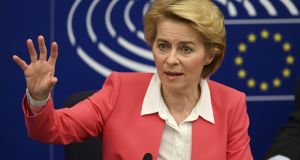 MEPs in Strasbourg this morning gave a resounding endorsement to Ursula von der Leyen’s new European Commission. They voted by 461 to 157 for the 27 nominees of the member states – leaving the UK seat still vacant in the absence of a nominee from London, and allowing the new commission to assume its functions on December 1st, only a month late.

The bruising parliamentary ratification process saw three commissioners – from France, Romania and Hungary – initially rejected by MEPs and their replacements grilled by committees last week to their general satisfaction.

The Green group, however, abstained on the vote on Wednesday, citing concerns about the ability of the new commission to take forward a genuine and radical climate policy while unwilling to reform both agriculture and trade policy. Some sceptical MEPs wondered whether their abstention had more to do with the failure of EU leaders to include any Green nominee among their commission nominees.

In the debate welcoming the commission nominations, Irish MEP Sean Kelly (EPP) took note of the Green slight to the new commission team, suggesting the new president should rename her flagship “European Green Deal” as the “enhanced climate change” programme. “No one group has a monopoly on climate change concern,” he said.

Introducing her team to the parliament, Ms Von der Leyen placed particular emphasis on the issue as her top priority, promising that the EU “will mainstream climate financing throughout its budget, but also throughout capital markets and the entire investment chain”.

With the opening next week in Madrid of the latest global climate conference, COP25, Ms Von der Leyen, who will address the conference, stressed that EU’s role in providing international leadership on the issue. “We have to bring the world with us and this is already happening.

“From China to Canada, through to California, others are working with us on their own emissions trading systems. And Phil Hogan [the new trade commissioner] will ensure that our future trade agreements will include a chapter on sustainable development.”

The challenge of persuading member states to commit to carbon neutrality by the ambitious but necessary date of 2030 will be a central task of the new commission.

Speaking to journalists following the vote, Ms Von der Leyen said she saw it as a “vote of confidence” by a broad majority of MEPs for an “agenda of change” on issues like climate, digitalisation and migration.

She promised the commission would bring forward a new “pact for migration” in the spring next year, including reforms of the so-called Dublin regulations. The current migration reform package has been stalled over how to ensure solidarity and contributions by all member states on burden-sharing over migration – key elements, she promised, of any new proposals.

Ms Von der Leyen was curiously silent on the other major challenge for Mr Hogan and the incoming commission: negotiating a future trade deal with the UK.

Although she expressed continued disappointment at the British desire to leave the EU, she chose to remain silent on how those talks might start, the EU mandate, and whether she could embrace Boris Johnson’s target date of December 2020 for ending them.

EU chief Brexit negotiator Michel Barnier told MEPs on Tuesday that, although the 11 months from Britain’s planned EU exit on January 31st until the end of its transition period would normally be far too short to negotiate a trade agreement, Brussels would strive to have a deal in place by the end of 2020.