More than 1m mostly Muslim minorites being held against their will, observers believes 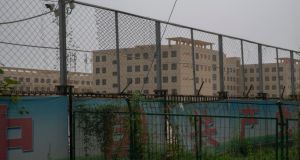 The Government has said it is “deeply concerned” about credible reports of mass detentions and surveillance in Xinjiang province in northwest China.

A statement was issued by the Department of Foreign Affairs and Trade in response to the China Cables reports, which were published on Sunday by The Irish Times and other media partners of the International Consortium of Investigative Journalists (ICIJ).

The reports, based on leaked documents from the Chinese Communist Party, show how inmates in the camps are being held against their will, under constant video surveillance, and must undergo “ideological transformation” in order to be released.

International observers believe up to one million, and quite possibly substantially more, members of the Uighur and other, predominantly Muslim, ethnic minority populations may be in the camps. The leaked documents show that each person has to spend at least a year there before being considered for release.

Asked to comment, the department said the government, as a matter of practice, did not comment on leaked documents.

“However, we remain deeply concerned about the credible reports of the treatment of ethnic Uighurs and other minorities in Xinjiang, including reports of mass detentions and surveillance.

“We take these reports very seriously, and have consistently raised our concerns directly with Chinese counterparts at official and political level, including through the EU.”

The department pointed out that Ireland was among 23 countries that supported a statement on the human rights situation in Xinjiang at the UN Third Committee in New York in October.

“Ireland, along with our EU partners, will continue to raise our concerns at both political and official level with Chinese authorities.”

The UK’s Foreign Office said it had serious concerns about the Chinese government’s “escalating crackdown” on Uighur and other ethnic minorities in Xinjiang.

“We want to see an end to the indiscriminate and disproportionate restrictions on the cultural and religious freedoms of Uighur Muslims and other ethnic minorities in Xinjiang. The UK continues to call on China to allow UN observers immediate and unfettered access to the region.”

A spokeswoman for the European commission said it did not comment on leaked documents but the EU’s position on the restriction of fundamental rights in Xinjiang was well known and had been consistently raised both bilaterally and in relevant multilateral fora.

“We have consistently spoken out against the existence of political reeducation camps, widespread surveillance and restrictions of freedom of religion or belief against Uighurs and other minorities in Xinjiang.”

In a statement to The Irish Times on Sunday, China’s ambassador to Ireland, He Xiangdong, said that as a result of “preventive counter-terrorism and de-radicalisation efforts, Xinjiang, a place that once suffered gravely from terrorism, hasn’t seen a single violent, terrorist incident over the past three years”.

“We will continue to implement our Xinjiang policy and ensure Xinjiang’s sound development,” he said.