In major speech with no mention of Border issue, UK foreign secretary lays out vision

British Foreign Minister Boris Johnson has appealed to those who he says are seeking to reverse the result of Britain's vote to leave the European Union, saying Brexit "is not grounds for fear but hope." Video: Reuters 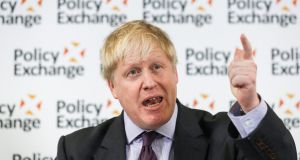 British foreign secretary Boris Johnson, speaking in London on Wednesday, said of Remainers that “we must also reach out to those who still have anxieties”. Photograph: Simon Dawson/Bloomberg

UK citizens after Brexit should have the freedom to retire to Spain, work abroad, go on “cheapo flights to stag dos” and fall in love with foreigners just as easily as now, foreign secretary Boris Johnson has said, in a speech urging Remainers to see the benefits of leaving the EU.

Mr Johnson, whose speech at the Policy Exchange think tank in London was billed as his vision for a “liberal Brexit”, said he wanted to extend a hand to Remain voters who he accepted were feeling a sense of loss. Mr Johnson said he had detected “a feeling of grief and alienation”, but said although some people’s fears had been unfounded, he had also detected “a hardening of the mood, a deepening of the anger . . . we must also reach out to those who still have anxieties”.

In the speech, Mr Johnson made no mention of Northern Ireland or the Border issue.

Mr Johnson said he believed a second referendum would cause more division – though he did not say it would necessarily be won by the Leave campaign. “I say in all candour that if there were to be a second vote I believe that we would simply have another year of wrangling and turmoil and feuding in which the whole country would lose,” he said. “So let’s not go there.”

He said he wanted to distance the government’s vision for Brexit from “some reactionary Faragiste concept”, in reference to the Ukip leader Nigel Farage. He said the UK would seek “the right deal on aviation and on visa-free travel” which would see the expansion of British exchanges and travel to the EU.

“We will continue ever more intensively to go on cheapo flights to stag parties in ancient cities, meet interesting people, fall in love, struggle amiably to learn the European languages whose decline has been a paradoxical feature of EU membership,” he said. “There is no sensible reason why we should not be able to retire to Spain, as indeed we did long before Spain joined the EU, or anywhere else.”

However, Mr Johnson said he also wanted to lay out a case for future divergence from the EU. “We would be mad to go through this process of extrication from the EU, and not to take advantage of the economic freedoms it will bring,” he said. “It is only by taking back control of our laws that UK firms and entrepreneurs will have the freedom to innovate, without the risk of having to comply with some directive devised by Brussels, at the urgings of some lobby group, with the aim of holding back a UK competitor.”

He said the UK government would be irresponsible to commit to having regulatory alignment in emerging sectors such as AI or robotics or bioscience, where he said the UK “may want to do things differently”.

“In a global marketplace, where we are trading in products that hadn’t been conceived even five years ago, serving markets that were poverty stricken only 20 years ago, it seems extraordinary that the UK should remain lashed to the minute prescriptions of a regional trade bloc,” he said.

Mr Johnson also suggested other benefits of regulatory divergence, including fisheries, banning the traffic in live animals, ending subsidies to rich landowners and cutting VAT on fuel. Planning laws could be relaxed, he claimed, because the government could adapt environmental impact assessments. Stem cell technology and financial services could also benefit, he said.

“It may be that we will need a regulatory framework, scrupulous and moral, but not afraid of the new. The same point can be made of innovative financial services instruments, where the FCA already leads the way.”

Mr Johnson, one of the leading lights of the Leave campaign ahead of the referendum, has borne much of the public anger from Remain voters, especially because of the Leave campaign’s promise for increased spending on the NHS, which the foreign secretary has made clear he still believes could happen.

He said he recognised that as the figurehead to make the case for a liberal vision of Brexit, “I run the risk of simply causing further irritation”. However, he hinted he believed the government had not adequately addressed the emotional attachment and identity crisis among Remain voters which was fuelling anger and demands for a second referendum.

“I must take that risk because it is this government’s duty to advocate and explain the mission on which we are now engaged,” he said. “It has become absolutely clear to me that we cannot take the argument for granted. We cannot expect the case to make itself. That was the mistake of the pro-EU elite when they won the last referendum in 1975.”

Later during questions from reporters, Mr Johnson said he believed Theresa May was also attempting to reach out to Remain voters. “I think the prime minister’s language, when I’ve heard her, has been always irenic and she understands the task we have; we have to bring people along with this project,” he said.”I accept that, this morning, I’m not going to bring along everybody. But I’ve got to try, I’ve got to make the effort. Because, in the end, these are people’s feelings and people’s feelings matter.” – Guardian News and Media