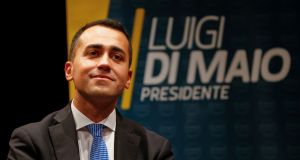 Italy’s anti-establishment Five Star Movement has been rattled by allegations that some of its politicians failed to abide by a pledge to direct half of their salaries to small business, clouding its campaign to win power in next month’s general election.

The furore is emerging as a serious problem for Luigi Di Maio, the 31-year-old leader of Five Star, since it could muddle his main selling point to Italian voters: that he can take on greed and duplicity in the political class.

“Their whole campaign was always about ‘honesty, honesty’, and ‘We are different than the political caste’. This contradicts the essence of the campaign,” said Jacopo Iacoboni, a journalist and author of L’esperimento, a book about Five Star.

With less than three weeks to go before a vote which could have big ramifications for the future of the European Union, Five Star has the strongest support of any single party, with the backing of about 28 per cent of the electorate.

Five Star’s chances of forming a government are low given that it is unlikely to win an absolute majority of seats in parliament and is averse to alliances. But even if it fails to win power, a strong showing by a party that has taken Eurosceptic positions on issues from fiscal policy to trade could heighten instability after the vote.

One promise by Five Star deputies over the years has been that they would direct half their salaries to a fund managed by the government to help small businesses. That commitment has resulted in €23 million in salary reimbursements in recent years, according to Five Star – and is frequently touted as a sign of their resolve to slash politicians’ perks.

But an investigation by Le Iene, a television programme on a channel owned by Silvio Berlusconi, leader of the centre-right coalition, revealed that several senior politicians cancelled reimbursement payments after posting confirmation of the wire transfers online. The scandal has spiralled to include more members of parliament and candidates for office – with Italian media reporting that the shortfall could exceed €1 million.

In an attempt to defuse the crisis, Five Star is combing through records to try to uncover other cases in which its code of conduct has been violated, and forced deputies accused of wrongdoing to stop campaigning.

“We will not allow anyone to sully the Five Star name. I will find the bad apples and throw them out,” Mr Di Maio said on a campaign stop near Naples. “It should be clear that the bad apples are everywhere, but we expel them and in other parties they are made ministers,” he added.

Yet Five Star’s political opponents have been quick to seize on the unfolding furore. “Five Star have been telling us they are morally superior for six years, but this is a clear hoax,” said Matteo Renzi, leader of the ruling centre-left Democratic Party. “They presented themselves as different compared with everyone else, but they are just like the others.”

Five Star has typically been immune to scandals – because voters have tended to give it the benefit of the doubt as upstarts who were just learning the ropes and were at least trying to clean up murky politics.

But Five Star’s biggest adversary in the March 4th vote may be abstention, particularly among its base of young voters in the economically struggling southern regions. If Five Star is seen as too close to traditional parties from an ethical point of view, potential supporters could stay away. – Copyright The Financial Times Limited 2018