Israeli PM alleged to have taken gifts ‘in systematic manner’ 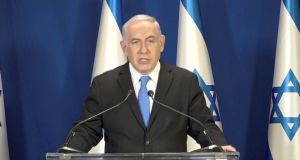 The Israeli prime minister, Binyamin Netanyahu, has vowed to stay in office after police concluded there was sufficient evidence to indict him for bribery, fraud and breach of trust in two corruption cases.

Israel’s attorney general, Avichai Mandelblit, will now have to decide whether to accept the police recommendations and indict Mr Netanyahu, who is not legally required to resign even if he is charged. It may be several months before the attorney general reaches his decision.

In a live television address on Tuesday night Mr Netanyahu said there was no basis for the police conclusions. “I feel a deep obligation to continue to lead Israel in a way that will ensure our future,” he said, claiming some 15 investigations had been opened against him in order to topple him from power.

“This time things will end without anything. These recommendations have no place in a democratic state,” he said.

The first investigation, dubbed Case 1,000, centres on gifts Mr Netanyahu and his wife, Sara, received from the Israeli-born Hollywood producer Arnon Milchan and other wealthy benefactors, including the Australian resort owner James Packer. The gifts received by the Netanyahus, such as cigars, champagne and jewellery, were given over about a decade and had a total value of about €230,000.

In return, police believe, Mr Netanyahu helped Mr Milchan obtain a US visa and worked for legislation that ensures Israelis who return to Israel from abroad receive generous tax breaks.

The police, who recommended that Mr Milchan also be charged with bribery, rejected Mr Netanyahu’s explanation that it was common for friends to exchange gifts. “One receives gifts, not demands,” the police said, claiming that the Netanyahus demanded “to receive the goods in a systematic and covert manner”.

The second investigation – Case 2,000 – focuses on conversations Mr Netanyahu held with the publisher of the popular Yediot Aharonot newspaper. Police say they discussed an illicit deal whereby the paper would soften its anti-Netanyahu line in return for the prime minister using his influence to curtail the growth of a competitor newspaper, Israel Hayom.

Israel Hayom is owned by the American Jewish billionaire Sheldon Adelson, a close ally of Mr Netanyahu at the time. Police said the publisher of Yediot Aharonot, Arnon Mozes, should also face charges.

The four-term prime minister, who has served as Israeli leader for a total of 12 years, vowed on Tuesday night not only that his coalition would see out its term in office until November 2019 but also that he would win the next election.

It remains to be seen how Mr Netanyahu can continue to function as Israeli prime minister, dealing with the difficult security issues this entails, while fighting to clear his name.

The ongoing graft investigations have done little to dent Mr Netanyahu’s public support and may have even increased his popularity among his right-wing and religious base.

Opposition politicians demanded that Mr Netanyahu step down immediately when the police recommendations were published. But the tourism minister, Yariv Levin, of Mr Netanyahu’s Likud party, called the police’s recommendations a “contemptible play for a government coup that flies against the will of the electorate”.

More significant will be the reaction of Mr Netanyahu’s coalition partners, none of whom has an interest in early elections.

The weak link is the centrist Kulanu party, led by the finance minister, Moshe Kachlon. A number of Kulanu Knesset members have already hinted that they will find it difficult to remain in the government if the prime minister is indicted on bribery charges.