Barnier warns agreement on transition is far from ‘a given ’

EU’s chief Brexit negotiator says ‘it is important to tell the truth’ about consequences at a press conference this morning. 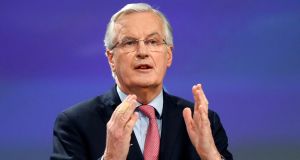 The determination of EU negotiators to put into “unambiguous” legal language the UK’s commitment to no “hard” border on the island of Ireland has provoked sharp disagreements between negotiators for both sides. A measure, some say, of “buyer’s remorse” on the UK’s part over commitments it made in December.

EU chief Brexit negotiator Michel Barnier told journalists in Brussels on Friday – at the end of a week of renewed Brexit talks – that the EU’s task force in preparing the text of the withdrawal agreement based on the December phase-one agreement had to “start legally defining how the scenario would work in operational terms”, in effect continued membership of the customs union for the North.

“There must be no ambiguity here,” he insisted, warning again that they were running out of time.

He said the UK had committed to three possible border scenarios in December, two of which depended on the “future relationship” talks which have yet to begin, and therefore could not be part of a withdrawal agreement.

To give certainty – and though he did not state it explicitly, to prevent UK backsliding on the commitments – “it is our responsibility to include the third option in the text of the withdrawal agreement to guarantee there would be no hard border, whatever the circumstances”.

Constructive talks today with @MichelBarnier in Downing Street. Our teams will work intensively to agree an implementation period by March.

The third option, the UK’s fallback position, promised that “in the absence of agreed solutions, the United Kingdom will maintain full alignment with those rules of the internal market and the customs union which, now or in the future, support North-South co-operation, the all-island economy and the protection of the 1998 [Good Friday] agreement”.

The task force is spelling out those many rules in the draft agreement text.

Mr Barnier said the UK had been willing to discuss operationalising the third option on condition the talks also encompassed the first two options – though he noted that one of those, involving full continued regulatory alignment between the UK and the EU, appears unrealistic given the UK’s determination to leave the single market.

He had been surprised by UK objections to the draft legal text on transition proposed by the task force this week – these objections include denying the right of EU citizens who move to the UK during the transition period to permanent residence, a clear breach, he said of the rights of free movement that were an essential part of the EU “acquis” to which the UK says it will remain party during transition.

He also cited the UK’s concern about not having a say on legislation passed during transition which it would be obliged to implement, and its wish to have the choice to participate in projects initiated in the same period, on which it has currently “opt-in” rights .

On the controversy this week over the transition text’s provision for speedy penalties against the UK over infractions of EU rules during transition, Mr Barnier said this was “absolutely normal” in international agreements. The measure to allow ministers impose sanctions over infractions was necessary  because of the very short period of transition and the slowness of the current process involving the European Court of Justice.

He insisted in response to British criticism that “there was no trace in my attitude of any lack of courtesy or an attempt to punish the UK”.

The UK Brexit secretary David Davis did not participate in the press conference – the UK described this week’s talks as “technical”. He said the difficulties in the talks this week “were not necessarily a drama, but a problem to be resolved”.