Saakashvili vows to return to Ukraine to oust ex-ally Poroshenko 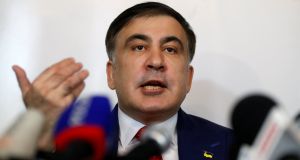 Georgian former president Mikheil Saakashvili speaks during a news conference in Warsaw on Wednesday, a day after he was expelled from Ukraine. Photograph: Kacper Pempel/Reuters

Former Georgian president Mikheil Saakashvili has vowed to return to Ukraine to oust an elite that he says is robbing and destroying the nation, a day after he was seized in a Kiev restaurant and deported to Poland.

Mr Saakashvili was expelled five months after supporters bundled him across the border from Poland and back into Ukraine, where he resumed opposition activities despite being accused of plotting a coup with a pro-Russian tycoon.

The leader of Georgia’s 2003 Rose Revolution again poured scorn on those allegations, and accused Ukrainian president Petro Poroshenko, a former ally, of trying to sideline critics and rivals ahead of elections planned for next year.

“I am entitled to re-enter Ukraine . . . and it will happen soon, because the end is coming for Poroshenko. We would have to be very stupid and weak not to save Ukraine from him. This gang should not run Ukraine any longer,” he declared.

“We will have one million on the streets of Kiev in the foreseeable future and then they will have to leave power peacefully.”

Mr Saakashvili has regularly attracted a few thousand supporters to his rallies, but polls suggest he does not enjoy widespread popularity in Ukraine.

The heavy-handed actions of Mr Poroshenko and his allies appear to have boosted his standing, however, as Ukrainians become increasingly frustrated with the broken promises of leaders who took power after a 2014 revolution against corruption and Russian influence.

Ukrainian media quoted an unnamed EU spokesperson as calling on Ukraine to uphold the rule of the law and Mr Saakashvili’s rights.

Mr Poroshenko invited Mr Saakashvili – with whom he studied in Kiev – to become the governor of the important but crime-ridden Odessa region in 2015.

He resigned the following year, however, and complained that the president and his allies were not interested in real reforms or in breaking the stranglehold of organised crime on the Black Sea province.

After Mr Saakashvili formed a new party called the Movement of New Forces, Mr Poroshenko revoked his Ukrainian citizenship last July due to alleged irregularities in his paperwork.

Mr Saakashvili and many Ukrainians saw this as a politically motivated attack, however, and it came as reformist deputies and civil society groups accused the billionaire Mr Poroshenko of protecting the interests of a corrupt elite.

Georgian officials said they may ask Poland to extradite Mr Saakashvili, who was sentenced in absentia in his homeland last month to three years in jail, for abuse of power during almost a decade as president.