‘There is no recovery for someone falsely accused, life and career are gone’

US President Donald Trump says former White House aide Rob Porter who's been accused of domestic abuse did a "wonderful job" when he was working in his administration. 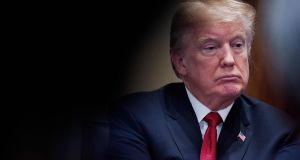 Donald Trump has asserted that “mere allegation” can destroy the lives of those accused. Photograph: Getty Images 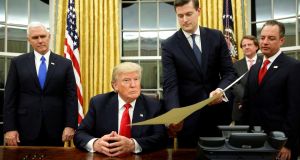 US president Donald Trump thrust himself into the national debate over sexual misconduct on Saturday, asserting that “a mere allegation” could destroy the lives of those accused, as his own White House was engulfed by charges of abusive behaviour.

Mr Trump, in a morning Twitter post, appeared to be defending two of his aides who resigned last week after facing claims of domestic violence.

“Peoples lives are being shattered and destroyed by a mere allegation,” he wrote. “Some are true and some are false. Some are old and some are new. There is no recovery for someone falsely accused, life and career are gone. Is there no such thing any longer as Due Process?”

The statement echoed Mr Trump’s dismissive response to allegations of sexual misconduct or abuse made over decades against male friends, colleagues and, above all, himself.

At a time when charges of sexual harassment and abuse are bringing down famous and powerful men from Hollywood to Washington, Mr Trump’s defiant stance put him at odds with much of the country and served as a stark reminder of his own troubled history with women.

It also drew an inflamed reaction, as people took to social media to note that Mr Trump used similar arguments to defend Roy S Moore, the Republican candidate who lost his bid for an Alabama Senate seat after being accused of child predation, and Bill O’Reilly, the disgraced TV personality who, along with his former employer, Fox News, paid tens of millions of dollars to settle sexual harassment claims.

Mr Trump, critics noted, has not let due process prevent him from rushing to judgment in other cases.

He has avidly promoted conspiracy theories, like those of the birther movement, whipped up his supporters at campaign rallies with chants of “lock her up” about Hillary Clinton, and demanded the death penalty for five young black and Latino men wrongly accused of assaulting and raping a white woman in Central Park.

For the #MeToo movement, which has spread into virtually every corner of American society, redressing a legacy of injustice even as it wrestles with questions such as the dangers of a rush to judgment, Mr Trump’s words were sure to make him, yet again, a lightning rod.

Peoples lives are being shattered and destroyed by a mere allegation. Some are true and some are false. Some are old and some are new. There is no recovery for someone falsely accused - life and career are gone. Is there no such thing any longer as Due Process?

His apparent defence of his two aides, Rob Porter, the staff secretary, and David Sorensen, a speechwriter, ran counter to the White House’s portrayal of its response to the accusations of emotional and physical abuse levelled against them.

Administration officials maintained that they acted decisively in each case.

But it was in keeping with the White House’s initially defensive reaction to the charges against Mr Porter, a messy trail of conflicting statements that has left the West Wing in turmoil, with angry officials pointing fingers at one another.

Ms Sanders said the president had “full confidence” in his performance while Mr Kelly described him as “a man of true integrity and honour.”

Yet the allegations against Mr Porter and Mr Sorensen were long-standing, well-documented and, at least in Mr Porter’s case, known to the White House for months, even as he held one of the West Wing’s most sensitive positions, channelling paperwork to the president.

One of Mr Porter’s former wives, Jennifer Willoughby, obtained a restraining order against him, while the other, Colbie Holderness, presented a photograph of herself with a black eye, which she said came from being hit by Mr Porter while the couple was on vacation in Italy.

The FBI informed the White House of these charges, which held up Mr Porter’s application for a permanent security clearance. Mr Kelly has told his staff he ordered Porter to be fired 40 minutes after learning of the charges, an assertion that other officials disputed.

In the case of Sorensen, his former wife, Jessica Corbett, told FBI agents conducting a background check on her husband that he had run over her foot while driving a car and extinguished a cigarette on her hand during a turbulent 2 1/2-year marriage.

Mr Trump generously praised Mr Porter, telling reporters on Friday: “He did a very good job when he was in the White House, and we wish him well.”

The president made no mention of the women that Mr Porter is said to have abused, a point several of the president’s critics noted.

“Look again at the photos of the face of Porter’s ex-wife after he assaulted her,” Republican Ted W. Lieu, said on Twitter.

“Victims deserve due process as well.”

Mr Trump’s call for due process does reflect a fear shared by others that the #MeToo movement has gained so much momentum that in some cases, men accused of misconduct are being judged too quickly or punished too severely for sexual behaviour that falls into a gray area.

Yet Mr Trump has been quick to judge in other instances. In the 1989 case of the Central Park jogger, Mr Trump bought a full-page ad in newspapers calling for the five suspects to be given the death penalty. Even after the convictions against the men were dropped 13 years later, Mr Trump insisted they were guilty.

“You falsely alleged rape by the #CentralParkFive even AFTER they were exonerated, but said nothing about due process for 5 black boys,” Cornell William Brooks, a former president of the NAACP, said in a tweet. “For 2 white men accused of wife beating, you argue due process. Due process applies to more than @WhiteHouse staff or white men.” – New York Times