Burglar sent to prison after getting stuck in bathroom window

Fire service had to be called to release Englishman Sean Crawshaw 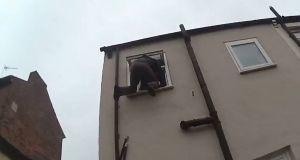 Handout photo issued by Greater Manchester Police Bury South of Sean Crawshaw, who got stuck in the bathroom window of a house he was trying to rob. Photograph: GMP Bury South/PA

A burglar, who got stuck in the bathroom window of a house he was trying to rob, has been sentenced to two years and four months in jail.

When police arrived on the scene of the attempted robbery, Crawshaw was hanging in mid-air from the window sill.

It took a call to the fire service to release him into the arms of laughing policemen, who charged him with burglary.

The 47-year-old from Radcliffe tried to burgle the property of a pensioner who was out shopping when he got stuck in the upstairs window of the house.

She returned to find him still stuck and called police.

“He got wedged in the bathroom window and ‘hung around’ for the Police to arrive. Sentenced to two and a half years imprisonment. Here is ‘exhibit a’.”