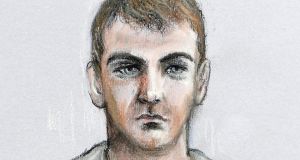 A Royal Marine with links to dissident republicanism has admitted hoarding explosives and making bombs for a terror attack.

Ciaran Maxwell (31), of Exminster, Devon, pleaded guilty at the Old Bailey to preparation of terrorist acts between January 2011 and August 2016.

Maxwell, who is originally from Larne, Co Antrim, admitted stashing explosives in purpose-built hides in England and Northern Ireland.

He compiled a library of terrorism documents, including instructions on how to make explosives and tactics used by terrorist organisations.

He also had maps, plans and lists of potential targets for a terrorist attack and images of an adapted Police Service of Northern Ireland (PSNI) pass card and a PSNI uniform.

He bought chemicals and components and went on to manufacture explosives and devices, the court heard.

There remain doubts whether Maxwell himself was a member of a dissident republican organisation, with security sources instead describing him as exhibiting “elements of lone wolf behaviour”.

However, it is understood detectives believe one of his associates was an active dissident.

Maxwell was also charged with possessing images of bank cards for fraud and possessing cannabis with intent to supply.

He appeared before Mr Justice Sweeney at the Old Bailey via video link from Woodhill jail and spoke only to confirm his name and enter guilty pleas to all the charges.

Maxwell was arrested on August 24th by officers from the Metropolitan Police Service’s counter-terrorism command, supported by Avon and Somerset and Devon and Cornwall Police.

He was remanded in custody to be sentenced on a date to be fixed.

The court heard that Maxwell stashed in his hides a range of explosive substances, devices and components as well as ammunition, weapons and tools for making bombs.

Maxwell was arrested in a pre-planned operation believed to have been linked to the discovery of two dissident arsenals in woodland on the outskirts of Larne in 2016.

Officers searched a house in Exminster in Devon and nearby Powderham New Plantation woods.

In Northern Ireland, officers also searched a number of properties in Larne.

In May, an armour-piercing improvised rocket and two anti-personnel mines were among the cache recovered at Capanagh.

Several pipe bombs, magazines and ammunition for an assault rifle, and bomb component parts and command wires were also concealed in barrels in purpose-built holes in woodland.

Since his arrest it emerged that at the age of 16, Maxwell was the victim of a savage sectarian beating in his home town.

He suffered a fractured skull and multiple other injuries when a gang of loyalists attacked him with iron bars and golf clubs.

During his recovery he recounted the incident to republican newspaper An Phoblacht in an article that was accompanied by a picture showing the extent of his injuries.

He said: “This investigation resulted in a significant disruption and protected public safety by removing a large quantity of dangerous material from circulation.”

Assistant Chief Constable Stephen Martin, of PSNI, said: “Working together, we have disrupted the activity of a dangerous individual and removed a very significant threat.”

Larne is predominantly unionist and loyalist in community make-up and the discovery of the finds led to some initial speculation that they could be linked to loyalist paramilitaries.

However, after assessing the nature of the weaponry, police said the hauls actually bore all the hallmarks of dissident republicans.