‘Grexit’ on the cards? A perfect storm is brewing in Greece

Bailout negotiations between Athens and its creditors have stalled – again 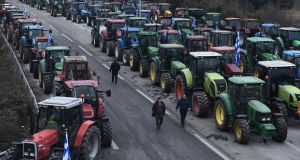 A blockade by Greek farmers this week at the Greek-Macedonian border. Photograph: Giannis Papanikos/AP 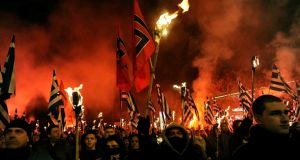 In the week of Groundhog Day, it seemed entirely appropriate: Greek farmers, many on tractors, have once again been blockading roads and border posts amid mounting signs that the country long at the epicentre of Europe’s debt woes is – once again – teetering towards crisis.

Protesting farmers have been a regular feature of the social unrest that has sporadically gripped Greece. It is now more than seven years since the Greek financial crisis erupted and the debt drama has often had a déjà vu quality about it.

Eclipsed last year by the UK’s vote to exit the EU, and US president Donald Trump’s equally unlikely electoral victory, audience interest in the nation’s epic struggle to keep bankruptcy at bay has inevitably waned.

But out of the spotlight, away from the headlines, a perfect storm is brewing.

Bailout negotiations between Athens and its creditors have stalled. The possibility of Grexit, or euro exit, has re-emerged and bond yields have spiked. The yield on a two-year Greek government bonds has soared from 6 per cent to 10 per cent in less than two weeks as spooked investors have dumped their holdings. And the shrill rhetoric last seen at the height of the crisis in 2015 has returned.

Analysts sensing dangerous deadlock are sounding the alarm – an alarm that the embattled prime minister Alexis Tsipras was expected to raise in talks with the German chancellor and other European leaders in Malta on Friday.

“I am very worried we are heading towards a rupture with the EU,” said Pantelis Kapsis, a prominent political commentator. “There are lots of signs that at the back of their minds, people in Syriza [the ruling leftist party] are entertaining various ideas of going it alone. What is sure is that we are entering a very difficult period which quite possibly could lead us to a point of no return.”

Once again, time is of the essence.

Shored up by a third EU-led bailout, Athens was told this week that further rescue funds would not be forthcoming until it concluded a compliance review of terms attached to the €86 billion aid package. In July, Greece faces debt repayments of €10.5 billion – once again raising the spectre of default because the country just does not have the money.

The impasse has turned into a standoff as creditors demand additional austerity once the current bailout expires. Without further reduction of pensions – already cut 12 times since the crisis began – and the tax-free threshold of personal incomes, the International Monetary Fund argues the debt-stricken country will never be able to achieve its agreed fiscal goal of a primary surplus of 3.5 per cent of GDP from 2018.

In a fiery parliamentary debate late Wednesday, Tsipras dug in, insisting his two-party coalition – in power with a wafer-thin majority of two – would not cave in to demands that his government has repeatedly called absurd. “The IMF’s demands go beyond any democratic and constitutional logic and value,” he railed.

Exiled from international capital markets, completion of the review is essential to Greece being included in the European Central Bank’s March 9th bond-buying programme, key to the country regaining market access. If the deadline is missed, few believe Athens will be able to keep itself afloat without a fourth bailout once the latest loans end.

And, in a Europe preoccupied with other matters – and in fear of an anti-establishment ascendant far right – the prospect of that happening is slim.

“What we are witnessing is a disaster for the real economy because everything is on hold,” said Costas Panagopoulos who heads the Alco polling institute. “Once again, we are talking about economic catastrophe, once again we are talking about Grexit. The next few weeks are critical. If an agreement isn’t reached, if there is more uncertainty, we don’t know how Greeks will react.”

On Thursday, amid widespread rumour of his own resignation, the finance minister Euclid Tsakalotos attempted to deflect the spiralling tensions. In a written statement, the Marxist economics professor said while a third of the bailout review had been “totally completed” and a third “totally agreed”, the rest remained subject to “political negotiation” – raising little hope of the talks concluding any time soon.

To great degree, events in Europe and Washington will also play a role.

Ahead of Germany’s general election in September, Berlin’s finance minister Wolfgang Schauble has also raised the stakes with growing criticism of Greece – a tactic that has proved popular with voters who might otherwise support Germany’s far right AfD party. Earlier this week Bild, the mass-selling newspaper, stoked passions further by suggesting the German government was warming to the idea of Greece leaving the euro – a notion Schauble has openly supported in the past.

“Grexit is not our agenda, it is the agenda of those who want the break-up of Europe,” said Sia Anagnostopoulou, a leading Syriza MP and former alternate European affairs minister. “It is what Mr Schauble wants,” she added, echoing the commonly held view that Athens is hostage to Germany.

Complicating matters further is the direction the IMF will take now that Trump is in power in the US. In his former role as billionaire businessman, Trump tweeted that the Greeks were “wasting their time” in the eurozone.

Last week, the IMF delivered its gloomiest assessment yet of Greece’s debt burden, arguing that it was not only unsustainable but eventually likely to become “explosive”. The Fund’s board will formally discuss the issue on 6 February but has already hinted that without a commitment of debt relief from the EU it will be unable to contribute further loans. Germany, the biggest contributor to the nearly €300 billion of emergency funds assigned to Greece, insists further aid depends exclusively on IMF participation.

Analysts are undecided whether the government is deliberately stalling in the hope of getting a better deal as repayment season approaches and fears of a disorderly default mount, or whether it is playing with fire.

Syriza, like every governing party before it, has been hollowed out by the eviscerating effects of having to apply policies that it came to power vowing to oppose. On Tuesday, its parliamentary spokesman took Greeks by storm, proposing that Grexit be discussed “without taboo” in the 300-member House.

The once unassailable popularity of Tsipras, meanwhile, has been pummelled by the implementation of some of the harshest measures to date and few believe he has the political capital to enforce another round of austerity.

“It is not a can but a bomb being kicked down the road,” said one western diplomat. “In a world where liberal values are under threat, we could be looking at a very dangerous scenario where the cradle of democracy also collapses.”

Bereft of growth and battered by cuts and tax increases, Greeks have become poorer and ever more cognizant of their own insolvency in a state where sovereignty exists in little more than name. One in three now live below the poverty line and unemployment hovers around 23 per cent. The latest impasse has not only seen emigration levels rise and non repayment of household and business loans soar, but also the nostalgia for drachma grow.

That is what worries Panagopoulos, the pollster, most. What was once a minority view is changing fast with the majority of Greeks in a recent Alco survey saying it was “wrong” to have joined the euro.

“We have become a society that has no hope, not even a slice or piece of hope for the future,” he sighed. “The only reason people want to stay in euro is because they fear the consequences if we were to leave, but if things don’t get better that will change too.”