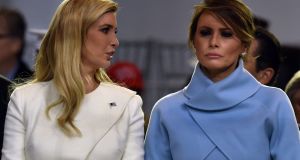 Ivnaka Trump, daughter of the US president, speaks with the first lady, Melania Trump, during the inaugural parade for Donald Trump on January 20th. Questions are being asked about what role Melania Trump plans to play as first lady. Photograph: Nicholas Kamm/AFP/Getty Images

When US president Donald Trump travelled to Dover Air Force Base in Delaware this week to pay respects to a fallen member of the Navy Seals, it was his daughter Ivanka – not his wife, Melania – who accompanied him.

Melania Trump’s conspicuous absence at the solemn ceremony underscored the fact that she vanished from public view days after her husband’s swearing-in two weeks ago. And it raised new questions about what role, if any, she plans to play as first lady.

Melania Trump shattered decades of tradition when she decided last year that she would not move into the White House when her husband took office, and would remain instead in the family’s lavish Manhattan penthouse so the couple’s 10-year-old son, Barron, could finish the school year. That decision has made for an unusually slow transition into what has traditionally been a hectic, demanding and heavily scrutinised role.

It was not until Wednesday that she named Lindsay Reynolds, who worked in the White House under president George W Bush, as her chief of staff, a position that most first ladies fill before inauguration day. Melania Trump has still not filled other crucial positions, including social secretary and communications director.

Unanswered requests for White House tours, traditionally run by the first lady’s office, have been piling up by the thousands, according to people familiar with the process, who spoke on the condition of anonymity. It is not clear how much planning has gone into the elaborate White House events that are among the heaviest tasks for first ladies, such as the annual Easter Egg Roll, which draws 35,000 attendees.

“She is far behind the curve compared to where modern first ladies have been by the time their husbands are inaugurated, in a quite unprecedented way,” said Myra Gutin, a professor at Rider University who specialises in first ladies. “We are in uncharted territory here.”

People close to Melania Trump say she has every intention of taking on a greater profile, though she is in no rush to establish a public presence. She is working behind the scenes to adjust to the job on her own terms, a task made infinitely more difficult by the implied comparison with Michelle Obama. Despite her own deep ambivalence about the role, Michelle Obama left it last month with a 68 per cent approval rating and perhaps the most vaunted celebrity status ever enjoyed by a first lady.

Melania Trump’s approval rating is 37 per cent, according to a Gallup poll conducted last month, which found that she was substantially less popular than previous first ladies at the dawn of their husbands’ presidencies. She is also considerably more of an enigma: One in four Americans were unfamiliar with or had no opinion of her.

And Melania Trump is pushing back more forcefully on the traditional confines of her position than did Michelle Obama, who after her husband’s election in 2008 had badly wanted to remain in Chicago with her young daughters while they finished their school year. She was instructed by his political aides that the public would never accept such a move.

After announcing her chief of staff on Wednesday, Melania Trump on Thursday chose an interior designer, Tham Kannalikham, to overhaul the White House private quarters. In the coming days, she plans to announce the hiring of Natalie Jones, a former Obama administration protocol official, as her social secretary, according to people briefed on her plans, and Stephanie Winston Wolkoff, a former director of Fashion Week at Lincoln Center who planned Donald Trump’s inaugural festivities, as her senior adviser.

“I am putting together a professional and highly experienced team, which will take time to do properly,” Melania Trump said in a statement on Wednesday. “I am excited to be organising and bringing together such a dynamic and forward thinking group of individuals who will work together to make our country better for everyone.”

But for now, the lack of staff has deprived Trump of control over her image, leading to speculation about everything from her state of mind to her moving date. Her absence from Washington fuelled rumours this week that she might never move to the capital. And with none of the customary images of the first lady adjusting to life in the White House, social media has seized instead on a meme based on video of Melania Trump frowning during the inauguration, spawning the hashtag #SadMelania.

Wolkoff said Melania Trump has every intention of moving to the White House and would be splitting her time between Washington and New York until then. “It has only been a short time since the inauguration, and the first lady is going to go about her role in a pragmatic and thoughtful way that is unique and authentic to her,” Wolkoff said.

The hiring of Reynolds appeared at least in part designed to answer concerns that have arisen about the unusually long disruption to White House tours. Reynolds said on Wednesday that she was “working to ensure that the White House Visitors Office is fully staffed and operational and ready to accept tour requests for the public in the coming weeks after a traditional temporary closure during the transition period”.

Reynolds also said that “plans are in place” for the Governors’ Ball, a black-tie event at the White House for the nation’s governors at the end of the month. A spokeswoman said meetings to plan the Easter Egg Roll would take place over the next few weeks.

Anita McBride, who served as chief of staff to Laura Bush, said Melania Trump should have space to define her position in the way that felt most comfortable to her. “Everybody has expectations of what they think it should be, but the reality is it’s really for the first lady to determine how she can fulfill the role that’s true to her,” McBride said.

“We’re just used to seeing these announcements done before an inauguration and everybody in place on Day One, but that doesn’t mean it has to happen that way.”