Paris attacker believed to be Egyptian in France on tourist visa

Head of Paris police Michel Cadot says a French soldier shot and wounded a man armed with a machete as he tried to enter the Paris Louvre museum in what he says looked like a terrorist attack. 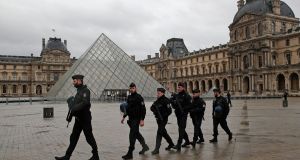 French police officers patrol the courtyard of the Louvre museum after a soldier was attacked in Paris. Photograph: Christophe Ena/AP Photo 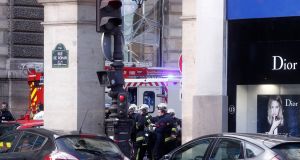 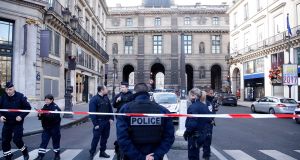 Police officers cordon off the area next to the Louvre museum in Paris. Photograph: Thibault Camus/AP 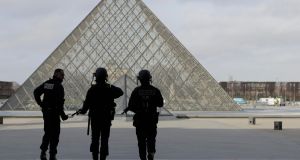 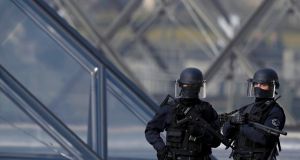 One French soldier was slightly injured in the incident. Photograph: Christian Hartmann/Reuters 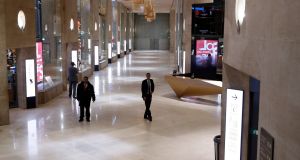 Security officers stand inside the Louvre museum, Paris, after an attack on a soldier. Photograph: Yoan Valat/EPA

The assailant who attacked French soldiers at the Louvre museum on Friday morning wore a black T-shirt emblazoned with a skull and wielded two 40cm machetes, one in each hand, raised behind his head, the Paris prosecutor Francois Molins has told a press conference.

President Francois Hollande and prime minister Bernard Cazeneuve said the attack on a four-strong foot patrol of paratroopers from the anti-terrorist “Sentinelle” unit had a “terrorist character”.

Witnesses said the attacker shouted “Allahu Akbar!” as he ran towards the soldiers.

The attacker, who has been named as Abdullah Reda al-Hamamy, a 29-year-old Egyptian born in Dakahlia, a province northeast of Cairo, took stairs leading to an underground shopping gallery from the Tuileries side of the Louvre and attacked the patrol before he arrived at the metal detector and bag search.

He hit the first soldier in the head with a machete.

A €955 bill for the machetes was found in his hotel room in a subsequent search, along with two holders for the weapons.

The assailant carried no identity papers. His rucksacks held aerosol paint cans and a mobile phone.

An Egyptian passport found in his hotel room contained a residence permit for the UAE, a Saudi visa and two Turkish visas, which he had used in 2015.

The suspect had applied for a French tourist visa in Dubai on October 30th, 2016.

He obtained a one-month visa valid from January 20th until February 20th on November 8th, 2016.

He arrived at Roissy Charles-de-Gaulle airport on January 26th and had a return ticket for February 5th. He rented a vehicle the day after his arrival.

Police also found an iPad and camera in the hotel room.

“The investigation continues, to determine the history and motivation of the attacker,” Mr Molins said. “Whether he acted alone or had instructions.”

Mr Molins pointed out that the attack took place exactly two years to the day after a man called Moussa Coulibaly attacked three French soldiers guarding a Jewish community centre in Nice. He is still imprisoned.

Some 250 tourists were present in the Louvre when the attack on Friday occurred at 9.50am Paris time (8.50am Irish time).

About 1,000 people, including museum staff and salespeople from the underground shopping centre where the attack occurred, were whisked into secured rooms for their protection.

The entire area, including the Tuileries gardens, Louvre and Palais Royal metro stations and the rue de Rivoli were locked down until early afternoon.

The Louvre remained closed for the day, but is scheduled to reopen on Saturday morning.

The Louvre is the most visited museum in the world, with some nine million tourist entries each year.

Tourism in France has declined sharply, however, since terrorist attacks killed 238 people in France in 2015 and 2016.

Friday’s attack coincided with the launch of Paris’s campaign to hold the 2024 Olympics.

US president Donald Trump tweeted that it was perpetrated by a “radical Islamist terrorist”.

The entire French political class, including presidential candidates, praised the courage, judgment, calm and rapid reaction of the four paratroopers from a base at Pamiers, in the Ariège region.

The soldiers were deployed as part of the “Sentinelle” mission, established in January 2015 after two brothers of Algerian original murdered 12 people at the satirical magazine Charlie Hebdo.

France has been under a state of emergency since 10 jihadists dispatched by Islamic State, also known as Isis, killed 130 people in Paris on November 13th, 2016.

The soldiers in the “Sentinelle” provide backup to police and the gendarmerie. They number between 7,000 and 10,000 at all times, with half deployed in Paris.

The anti-terrorist prosecutor’s office has opened an investigation into the incident.

“Allahu akbar” is the signature cry of jihadists, last used in July 2016 when two 19-year-olds slashed the throat of a priest in Saint-Etienne-du-Rouvry, Normandy.