US imposes new sanctions on Iran after missile test 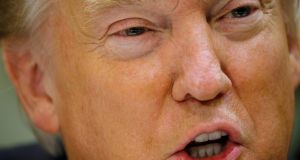 The US on Friday sanctioned 13 individuals and 12 entities under its Iran sanctions authority, days after the White House put Tehran “on notice” over a ballistic missile test and other activities.

“The Trump administration will no longer tolerate Iran’s provocations that threaten our interests,” US national security adviser Michael Flynn said in a statement on Friday.

“The days of turning a blind eye to Iran’s hostile and belligerent actions toward the US and the world community are over.”

A senior administration official said the latest sanctions were the initial steps in response to Iran’s “provocative behaviour”, suggesting more could follow if Tehran does not curb its ballistic missile programme and continues support in regional proxy conflicts.

The official said the administration was “undertaking a larger strategic review” of how it responds to Iran.

Those affected by the sanctions cannot access the US financial system or deal with US companies and are subject to secondary sanctions, meaning foreign companies and individuals are prohibited from dealing with them or risk being blacklisted by the US.

Iran is playing with fire - they don't appreciate how "kind" President Obama was to them. Not me!

We will never use our weapons against anyone, except in self-defense. Let us see if any of those who complain can make the same statement. pic.twitter.com/xwGquvqLvb

In a statement on its website, the US treasury listed the sanctioned individuals and entities, some of which are based in the United Arab Emirates, Lebanon and China.

The move is the first against Iran since US president Donald Trump took office on January 20th.

The sanctions were similar to actions taken by the Obama administration targeting Iran’s ballistic missile network.

The new designations cover areas that remain under sanctions even with the 2015 nuclear deal in place, such as the Islamic Revolutionary Guards Corps (IRGC) and Iran’s ballistic missile programme.

“Today’s action is part of the treasury’s ongoing efforts to counter Iranian malign activity abroad that is outside the scope of the JCPOA,” the treasury said, referring to the nuclear deal between Iran and world powers.

Among those sanctioned on Friday were companies, individuals and brokers the US treasury accused of supporting a trade network run by Iranian businessman Abdollah Asgharzadeh.

The treasury said Mr Asgharzadeh supported Shahid Hemmat Industrial Group, which the US has said is a subsidiary of an Iranian entity that runs Iran’s ballistic missile programme.

The treasury also sanctioned what it said was a Lebanon-based network run by the Islamic Revolutionary Guard Corps, the elite military body that is a powerful figure in Iranian politics and the economy.

Ahead of the announcement, Iranian minister for foreign affairs Mohammed Javad Zarif tweeted: “We will never initiate war, but we can only rely on our own means of defence.”