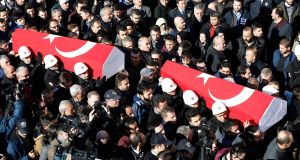 Urban targets: coffins are carried through the crowd at the funeral of police officers who were killed in a bomb attack on the Besiktas football stadium in Istanbul in December 2016. Photograph: Sedat Suna/EPA

Safe from the sub-zero gusts blowing down Istanbul’s Bosphorus strait, motorists abreast the Besiktas stadium are stuck in a long line of evening rush-hour traffic and getting nowhere fast.

It was here, shortly after a football match on December 10th, 2016, that a twin bombing killed 45 people, the majority of whom were riot police working at the game. For the motorists, seeing the flowers, notes of condolences and slogans of defiance against terrorism in this kind of traffic offers them time to contemplate, with increasing worry, what is happening to their city.

The Turkish government has been locked in struggles with Kurdish militants of the PKK and the Islamic State terrorist group, while also implementing a far-reaching purge in the aftermath of a failed military coup last July.

But it now faces a new adversary in the Kurdistan Freedom Hawks, or Tak, an offshoot of the PKK and the separatist group responsible for the Besiktas stadium attack.

Turkey has vowed revenge against this new enemy.

“Sooner or later, we will have our vengeance. This blood will not be left on the ground, no matter what the price, what the cost,” the country’s interior minister, Süleyman Soylu, said following the blasts.

For decades, the PKK has fought a war of ambush confined largely to the isolated and rural regions of the southeast, far from civilians or much human activity.

Now, the apparently indiscriminate nature of Tak’s mode of attack has spread fear among urban dwellers, unused to such incidents on their doorstep, and has contributed to an emerging backlash against the country’s Kurdish minority.

When facing the PKK threat, soldiers posted at checkpoints along Turkey’s Iraqi and Iranian borders lived and worked in constant fear, with the militants’ ability to slip across the border being a crucial tactical advantage.

Recent months have seen Tak take on a more troubling, though perhaps from its perspective, more effective method of war: the use of suicide bombings in the built-up city centres and airports of Istanbul and Ankara, which have, in addition to killing police officers, led to dozens of civilian deaths.

Attacks in recent weeks – outside the stadium in Istanbul and another in Kayseri on December 17th – have claimed the lives of more than 44 police officers and a dozen bystanders. Tak has been using car bombs and young Kurdish men and women, often university students, who are prepared to blow themselves up in crowded areas.

Although Tak’s targets are police and security officers, the fact that it now appears to have taken the PKK’s place as the biggest threat to peace and security in Turkey has caught the government – which has focused its public relations message on blaming the PKK and cleric Fethullah Gülen for the country’s ills – off guard.

Tak’s history is contested and its goals are to fight a war of revenge, but some commentators have referred to it as the PKK’s urban outfit.

“Tak is an offshoot, trained by the PKK,” says Gareth Jenkins. a senior associate fellow at the Silk Road Studies Programme, who has lived in Turkey since 1989. “Sometimes Tak suicide bombers are from local Kurdish communities. The PKK often sets categories of targets for Tak, but specific targets are left to the [Tak] units themselves. For example, in Kayseri it is possible the PKK leadership didn’t give the specific orders.”

Tak’s tactics may upend Turkey’s long-time strategy against separatist groups. Turkey’s cities are by far its main drivers of growth. Hundreds of thousands of people migrate from the north, east and southeast of the country to Istanbul, Ankara, Izmir and Bursa every year for work and education. Until recently, Istanbul was one of the world’s most popular international destinations for tourists, who contributed €8.3 billion to the city in 2014.

Jenkins says the urban bombing campaign could affect the country and the government’s popularity in a variety of ways.

“If there is a government in power and it can’t control PKK violence, it reflects badly on it. You’re going to get a lot of hatred against the PKK, but also a sense that the government is failing,” he says.

“What we’re seeing is the highest level of violence in Turkey in winter ever. The PKK can’t carry out attacks from its base in the Qandil Mountains now because of the weather. [But in the cities] the level and number of bombings is unprecedented.”

Jenkins also believes there is less sympathy for the rights of Kurds among the Turkish population today than in the past.

“One of the most frightening things is the lack of media coverage of what’s happening in the southeast. There’s a huge sense of abandonment among Kurds and almost no interest from rest of country. This is something new,” he says.