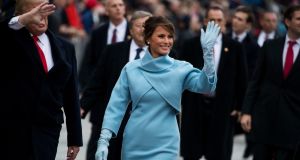 A Maryland judge has dismissed US first lady Melania Trump’s libel lawsuit against Britain’s Daily Mail newspaper over an article on its website that she claimed included false statements about her.

The Daily Mail’s argument had centred on whether the lawsuit should have been filed in Maryland and whether Ms Trump was suing the correct corporate entity.

Ms Trump has also filed a lawsuit against the paper in London.

The first lady’s libel suit against blogger Webster Tarpley of Gaithersburg, Maryland, for reporting similar statements was allowed to move ahead last week.

She filed the lawsuit in Rockville in September, after both Mr Tarpley and the Daily Mail issued retractions.