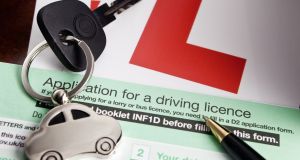 A survey of recently returned Irish citizens last year found that applying for driving licences was among the biggest challenges they experienced after moving home. Photograph: iStock

People living outside the State seeking to swap their foreign driving licence for an Irish one are facing weeks-long delays on applications for the State’s driver-training programme.

The delays are due to the strain on resources because of the post-Brexit surge in people from Northern Ireland and Britain applying for licence exchanges ahead of the UK’s original exit date from the EU on March 29th.

Brexit and the fear of being unable to swap a British or Northern Irish driving licence for an Irish licence without having to undertake a training programme led to a rush of applications for exchanges.

An Irish licence can be exchanged for one issued within the European Union.

To ease the administrative burden on Irish emigrants returning home and others moving to Ireland, the Government this year introduced a reduced essential driving trade (EDT) programme whereby applicants would have to sit only six one-hour training sessions instead of the full programme of 12 sessions.

The Road Safety Authority (RSA) introduced the reduced programme in January for drivers who hold a full car licence but come from a country that does not have a licence exchange agreement with the State. The measure was introduced to help emigrants returning from the US and parts of Canada in particular.

A spokesman for the RSA said resources were assigned to processing UK and Northern Ireland licence exchange applications due to the significant increase in applications, delaying the EDT process.

“There was a tenfold increase in UK/NI licence exchange applications accepted in the period up to the end of April 2019. This resulted in delays for the processing of EDT applications which extended to an average of 20 days,” said the spokesman.

He said the National Driving Licence Service (NDLS) had received 1,224 applications for the EDT programme at the end of last month and that it had been meeting the target processing time of two to three days during the early stages of the reduced programme in January and February, but this had since slipped.

The RSA said additional resources had been assigned to processing EDT applications and that the number of applications requiring processing was “now significantly reduced.”

The average processing time for an application would be back to two or three days this week, he said.

One US-based man said he had been waiting five weeks for the NDLS to respond about his reduced EDT since posting in his American driving licence and letters of entitlement.

A survey of 400 recently returned Irish citizens published last year found that applying for driving licences was among the biggest challenges they experienced after moving home.