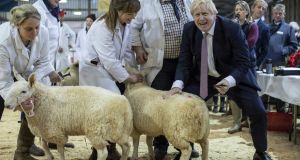 Boris Johnson has come under pressure over the Conservative manifesto’s promise of 50,000 more nurses for the National Health Service (NHS) after the party admitted that 19,000 of them would be existing nurses. Rejecting accusations that the manifesto’s claim was misleading, Mr Johnson said that the 19,000 nurses would leave the NHS if the government did not take action.

The British prime minister will seek on Tuesday to shift the UK election campaign’s focus onto Brexit, claiming that it would take opposition Labour leader Jeremy Corbyn nine months and cost £150 million to hold referendums next year on Brexit and Scottish independence. Mr Corbyn has promised a second Brexit referendum within six months if elected but has ruled out a Scottish independence referendum within the first two years of a Labour government.

But Mr Johnson said the Labour leader would agree to SNP leader Nicola Sturgeon’s demand for an early independence referendum in return for her party’s votes to put him into Downing Street.

“The financial cost of this to taxpayers up and down the country will be in excess of £150 million. But the real cost will be much, much higher: the chaos of two referendums in 2020 grinding the country to a halt and the world’s greatest political union reduced to the status of a bargaining chip.”

“We would have a discussion with the EU about the journey an independent Scotland was on in terms of currency, and the accession if Scotland was already out of the EU to the point where we rejoined the EU. Scotland faces right now the uncertainty of being ripped out of the EU against our own will. It’s not of our making. And we need to plot the best way forward for our country where we are in charge of the decision that we make,” she said.

Mr Corbyn will launch his party’s Race and Faith manifesto on Tuesday, promising to establish a race equality unit at the Treasury and to require bigger companies to report their pay gap for ethnic minorities. The manifesto also promises to recruit more black teachers for schools and to establish an Emancipation Educational Trust “to ensure historical injustice, colonialism and [the] role of the British empire is taught in the national curriculum”.

“Only by acknowledging the historical injustices faced by our communities can we work towards a better future that is prosperous for all, that isn’t blighted by austerity and the politics of fear,” Mr Corbyn said.

Uproar in US after troops deployed for inauguration forced to sleep in car park 12:45
Italy tells TikTok to block users after death of 10-year-old girl 12:22
Police ‘arrest at least 100’ Navalny supporters ahead of Moscow rally 10:50
Covid-19: Hong Kong locks down thousands for compulsory testing 10:49
One year on: Coming from Wuhan is now a source of pride but many remain wary 10:30