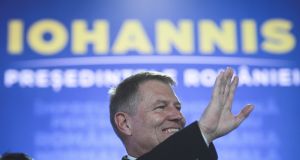 The European Union has welcomed the re-election of Romanian president Klaus Iohannis on pledges to fight corruption and work closely with the bloc, as his defeated opponent faced calls to resign as leader of her populist party.

With almost all ballots counted from Sunday’s election, Mr Iohannis had 66 per cent of votes against 34 per cent for former prime minister Viorica Dancila, whose heavy loss capped a disastrous year for her Social Democratic Party (PSD).

“A modern, European, normal Romania won . . . I accept this victory with joy, gratitude, modesty and with faith in Romania,” said Mr Iohannis (60), a former physics teacher and mayor of the Transylvanian city of Sibiu who hails from his country’s ethnic German minority.

He was a fierce critic of the PSD’s bid to weaken anti-graft laws and increase political control over Romania’s courts during its turbulent spell in government from January 2017 until it lost a parliamentary no-confidence vote last month.

The PSD-led cabinet’s reform drive sparked Romania’s biggest protests since its 1989 anti-communist revolution and put it at loggerheads with the EU.

“Congratulations Klaus Iohannis on your re-election as president. The strong support of the Romanian people for your unequivocally pro-European choices for the country comes at an important time in Europe. I know I can count on Romania’s active role in furthering the EU project,” European Commission president Jean-Claude Juncker wrote on Twitter on Monday.

Ms Dancila and her PSD government were replaced this month by the centre-right National Liberal Party under prime minister Ludovic Orban, who hopes a period of stability will help his party win next year’s parliamentary elections.

“Between me as prime minister and Romania’s president . . . there is finally a relationship of dialogue, loyal co-operation and partnership, in which we co-ordinate all our actions, all decisions and all public policies to the benefit of the Romanian citizens,” Mr Orban said on Monday.

Ms Dancila said publicly she would not resign as PSD leader but, amid sharp criticism from senior party figures, unconfirmed reports appeared in Romanian media on Monday evening that she had agreed to step down officially on Tuesday.

The PSD has not recovered from a disastrous couple of days in May, when it lost European elections and a referendum on its legal reforms, and also saw party chief and de facto government leader Liviu Dragnea jailed on graft charges.

“Let’s be honest: this is a disastrous result that follows an equally bad result in European elections,” the PSD speaker of parliament, Marcel Ciolacu, wrote on Facebook.

“The PSD needs a new start. We have local elections in six months and we cannot lose them.”