UK election: ‘Labour is promising to give away everything bar a free unicorn’

Jennifer O’Connell finds Brexit on the minds of Dudley North, a marginal seat in the sights of the Tories 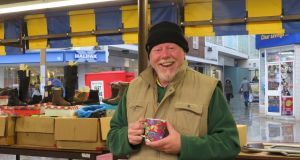 Brian Tranter at his market stall in Dudley. He remembers a time when “you could leave one job in the morning, and have another in the afternoon”. Photograph: Jennifer O’Connell

The town of Dudley is at the heart of Britain’s Black Country, a once wealthy, industrialised swathe of the West Midlands that counts the world’s first steam engine, the Titanic’s anchor, and the introduction of the minimum wage among its claims to fame.

Dudley itself is better known these days as the shooting location for Peaky Blinders. But none of that is why politicians and the media have been descending here over the last month. The town is home to the ultra-marginal constituency of Dudley North, where Labour clung onto its seat by a mere 22 votes in 2017. The Conservatives will have that seat firmly in their sights on December 12th.

Their chances are significantly bolstered by two factors: the decision of Ian Austin, the popular Labour MP who squeezed in for a fifth term last time, not to stand again, and to ask his supporters to vote Conservative. The second factor is the shock announcement by the Brexit Party candidate, Rupert Lowe, that he would also make way for Boris Johnson’s Tories, to the reported fury of Nigel Farage.

If all that sounds like the kind of drama needed to whip up election fever, the prevailing mood on the street suggests otherwise. Several business owners decline to discuss the election; a few even shudder visibly at the prospect. But for those who are prepared to talk, it becomes clear there’s only one issue at stake.

“Owamya,” is the greeting offered by Stephen Pitts in his shop, Black Country T-Shirts. That’s “how are you” in the local dialect, he explains, going on to recommend some of the region’s cultural highlights: “orange” (battered) chips, and a pint in the Crooked House pub, Dudley’s Leaning Tower. In common with 71 per cent of voters in the constituency, Pitts voted to leave the EU in 2016. Since then, he’s had second thoughts. “There’s been so much rhetoric without any substance.”

He’s undecided, but leaning towards Labour, because he wants a second referendum. He would now vote Remain. “There’s a lot of information now that we just didn’t have then.”

In the Arcade Toy Store, Dave Carter has begun to swing in the other direction. He originally wanted to remain but “the longer it has gone on, I’ve changed my mind, and I definitely want out now. I don’t think we should keep voting until we get the result we want.”

A Labour voter in the past, he’s disillusioned with both sides. “Labour is promising to give away everything bar a free unicorn.”

No great fan of Johnson, and especially not of the Labour leader Jeremy Corbyn, he can see himself voting Tory this time, on the basis that Johnson will “get the job done. I don’t think I’d vote for him for a second term though.”

His business partner, Martyn Perry, and Martyn’s wife Jan, who runs a children’s clothes boutique out of the premises, are similarly undecided. “I think we need to get Brexit done, so we can get on and get law and order and the NHS sorted,” says Martyn. “My only concern is how it’s going to affect Ireland and the border.”

Jan’s main reservation – one heard quite often on the street of Dudley North – is that she doesn’t entirely trust Boris Johnson.

In the vintage camera shop a few doors up, Neil Smith thinks Brexit uncertainty is already negatively affecting business. “We’re not even out of Europe yet, and already I’m selling less to Europe.”

He’s so disillusioned by the endless delays, “I might not even vote this time. Depends how I feel on the day.”

Only former Ukip councillor Roger Scott, who is holding a closing down sale in his gentleman’s outfitters ahead of his retirement next year, is certain how he’ll vote – “for Boris, because I’m for getting out of Europe, and that’s the only vote you can cast”.

The West Midlands “had some very nice years when we had heavy industry, but we’ve lost tens of thousands of jobs in this region alone”. The mood here now is “anger about what’s happened, and where we are”. What’s needed now, he thinks, is for the region to take back control of its own fate.

Dudley’s once-famous 12th century market – which recently underwent a £6.7 million refurbishment, part-funded by the EU – has dwindled to a handful of stalls. Its fate was sealed when one of its own traders set up Britain’s first Poundland right across the street, but like the rest of this part of the West Midlands, it has limped on.

The market’s shoe seller, Brian Tranter, a “diehard Brexit supporter”, can remember a time when “you could leave one job in the morning, and have another in the afternoon”. Brexit, for him, is the way back to that time.

What are the issues people here care about? “Brexit. Since there’s no Brexit Party candidate, they’ll vote Tory. I don’t think Labour will get back in.”

Jennifer O’Connell will be reporting from two of Britain’s most marginal constituencies, Dudley North and Newcastle-under-Lyme, this week, and will return again before the election to see if the mood on the ground has changed.