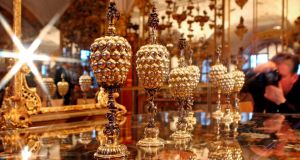 Historic grape cups on display in the Green Vault in Dresden. The royal jewels were collected in the 18th century by King August. Photograph: Ralf Hirschberger/EPA

Jewels thieves have carried out a spectacular heist in Dresden, stealing dozens of priceless objects from the Saxon crown jewels.

At about 5am two thieves broke into the former royal palace and headed straight for the Green Vault jewel room. There they smashed their way into three glass cases containing 94 pieces of 18th century pearl and diamond jewellery.

“Nowhere in Europe is there a collection of jewels in this form and quality,” said Dirk Syndram, head of the Green Vault.

Dr Marion Ackermann, director general of the Dresden State Art Collections, said the value of the stolen objects was less their jewels but as part of a complete royal jewel collection from the 18th century, with rare techniques used to cut and polish the stones.

“We cannot speak of their material value because, to be honest, they are unsellable, we speak of their art historical value – which is priceless,” she said.

The director expressed hope that the crown jewels are too well known to find buyers on international markets but could not rule out that the pieces will be broken up to sell the individual stones.

Police said they were informed at 4.59am on Monday by two security staff in the museum that they had seen two people in the vault. Investigators were unable to say at a lunchtime press conference if the alarm had been triggered or not. A fire at a nearby generator early on Monday morning had forced an electricity shutdown in the entire historic old town area area around the palace, on the banks of the River Elbe.

“The perpetrators forced their way in through a window on Palace Square after cutting through a grille,” said Volker Lange, local head of the federal criminal police (BKA). “They headed directly to the glass display cases, smashed them, disappeared from the building and vanished.”

Investigators are now studying video recordings of the break-in, and have informed all neighbouring police forces. They admitted that the hunt for the perpetrators is difficult, because the palace is five minutes’ drive from the motorway. They are examining a burnt-out Audi, found in an underground car park on Monday morning 15 minutes after the alarm was raised, on suspicion that it was the original getaway car.

The robbery has shocked Dresden and Saxony, which is proud of its royal jewels, collected in the 18th century by King August. At the outbreak of the second World War the 3,000-piece collection was bunkered in the nearby Königstein Castle. There it survived the firebombing of the city in February 1945 which destroyed three display rooms of the palace.

The collection was seized by the Red Army and only returned to East Germany in 1958. The historic Green Vault only reopened in its original location in 2006, after a €45 million renovation.

“Not just the state art collection was robbed but all Saxons,” said Michael Kretschmer, state premier in Saxony.

Curators admitted at lunchtime on Monday that a police investigation at the scene meant they had not yet had a chance to assess the full extent of the theft. One of the collection’s most valuable pieces has been saved, they said. A priceless 41 carat green diamond is currently on display in the Metropolitan Museum in New York.