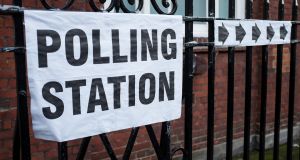 The Green Party, which had already stepped aside in a number of constituencies in favour of other pro-Remain candidates, is to stand in three constituencies. Photograph: iStock

A total of 102 candidates are to contest Northern Ireland’s 18 constituencies in the general election on December 12th.

Nominations closed on Thursday, with only the Alliance Party running candidates in all 18 constituencies.

The DUP will run in 17 constituencies and is supporting the UUP candidate in Fermanagh and South Tyrone.

The UUP is standing in 16 constituencies, despite an earlier pledge by the party leader, Steve Aiken, to run in all 18.

The party had already announced it would stand aside in North Belfast following opposition from unionists who feared a UUP candidate would damage the chances of the DUP’s Nigel Dodds retaining the seat and gift victory to John Finucane of Sinn Féin.

It is not standing a candidate in West Belfast, a constituency which traditionally has a small unionist vote.

Both Sinn Féin and the SDLP are running 15 candidates each. The parties had already said they would stand aside in certain constituencies in order to maximise the pro-Remain vote.

The Green Party, which had already stepped aside in a number of constituencies in favour of other pro-Remain candidates, is to stand in three constituencies.

The republican anti-abortion party, Aontú, is standing in a general election in Northern Ireland for the first time, with seven candidates.

The Traditional Unionist Voice (TUV), which has previously fielded candidates, is not standing in this election.

Two candidates are standing on behalf of People Before Profit, while the Northern Ireland Conservative Party is running four candidates and UKIP – Unionists for Brexit two. There are also three independents.

The DUP leader, Arlene Foster, said it would be a “close election”.

Meanwhile the Our Future Our Choice Northern Ireland (OFOCNI) lobby group will endorse a number of pro-Remain candidates at an event in Belfast tomorrow.

The cross-community, non-party affiliated youth campaign is giving its endorsement to candidates in what it describes as key marginal seats, including John Finucane in North Belfast, Colum Eastwood in Foyle, Clare Hanna in South Belfast, Stephen Farry in North Down and Danny Kinahan in South Antrim.

“This election is all about Brexit and it’s the most important election in a generation,” said OFOCNI co-founder Doire Finn.

“The outcome will shape our futures for years to come. It could be a very close, and so it’s time to put narrow ideology aside and ensure we do all we can to return pro-Remain MPs

“Our message isn’t to political parties - it’s directly to voters. We can’t risk splitting the vote in key seats and allow pro-Brexit MPs to return in such large numbers to Westminster,” she said.

“That’s why we are endorsing a list of strongly pro-Remain candidates in key seats who represent the diversity of the pro-Remain support in Northern Ireland, and will be doing all we can to ensure they are returned as MPs on December 12th.”

The deadline for registering to vote is November 26th, while postal or proxy vote applications must be submitted by November 21st.

Voting will take place between 7am and 10pm on December 12th, and the first results will be expected in the early hours of December 13th.