‘Auschwitz did not fall suddenly from the sky’ – Holocaust survivors speak

At the site of the Nazi death camp, former prisoners made one last plea to humanity 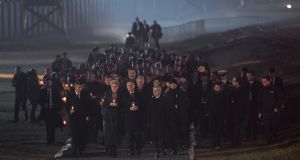 Polish President Andrzej Duda and Polish First Lady Agata Kornhauser-Duda lead official delegations to lay candles at the Auschwitz Memorial during the official ceremony on Monday to mark the 75th anniversary of the liberation of the concentration camp near Oswiecim, Poland. Photograph:Omar Marques/Getty Images

It was just before 6pm when the Kaddish, the Jewish prayer of the dead, intoned from the mouth of a frail rabbi and survivor.

For the 1.3 million dead of Auschwitz-Birkenau: Poles, Sinti and Roma, Soviet prisoners of war and, above all, 1.1 million Jews.

Their ashes lie scattered in the frozen soil beneath the gaze of gathered survivors, kings, presidents, prime ministers and delegations from 50 countries. All stood in frozen silence – some with shining eyes, others with soaked cheeks – at the last moments of the last major Auschwitz anniversary service with survivors present.

Four survivors spoke, in the name of those liberated 75 years ago and those who were murdered, before the notorious red brick gate of the Birkenau extermination facility.

They all had the same message: tears for the past are useless if accompanied by indifference in the present towards minorities experiencing exclusion, racism and related violence.

Marian Turksi survived two death marches weighing just 32kg and said his last priority in life was to reach out to his granddaughter and her peers. Not to bombard her with horrific facts of a past that is far away to them, but to warn gently, urgently about how seemingly unthinkable horror becomes normality.

The Nazi camp of Auschwitz-Birkenau didn’t drop from the sky, he reminded his audience, but was the end point of a process that began with exclusion: from park benches, bakeries, parks, pools. Once a new reality of stigmatism and exclusion was established, it was a short step to strip further rights, to dehumanise and to disappear that minority.

“Auschwitz did not fall suddenly from the skies, it was all tiny steps approaching until what happened here behind me did happen,” he said.

Horror could happen again, he said, in places where the past is stretched to meet present political needs, or where the majority is indifferent to minorities being stripped of their rights.

“Do not be indifferent when any power or government infringes on extant social rights and do not be indifferent,” said Turksi. “Otherwise you won’t even notice when you and your heirs suddenly see an Auschwitz falling down from the sky, straight on them.”

Elza Baker was deported from her Hamburg home as an eight-year-old and put in the so-called “Gypsy camp” of Auschwitz. Now blind, she still sees in her mind’s eye the Nazi systematic extermination – including the 500,000 of her own people murdered, and ignored by the world for decades after the war.

“In times like this, when minorities have to feel vulnerable again,” she said, “I can only hope that everyone will stand up for democracy and human rights.”

Where was everybody? Where was the world who could see and hear that and did nothing to save all those thousands?

Batsheva Dagan, a 95-year-old survivor from the Polish city of Lodz, was assigned to the corner of the camp sorting through the clothes and belongings of the murdered. A shortage of striped prisoner uniforms meant she was assigned a Russian soldier jacket and a Jewish prayer shawl as a skirt. But it was the loss of her hair that hit her hardest.

“These criminals’ hands took my hair, this crown of mine was taken away from me . . . what they were really after was depriving me of my own human face,” she said.

She survived by hiding from notorious camp doctor Josef Mengele and his selection lines for medical experiment victims.

“I still have a feeling today, where was everybody? Where was the world who could see and hear that and did nothing to save all those thousands?” she said.

Ronald Lauder, president of the World Jewish Congress and a son of Hungarian survivors, reminded the audience how no one who walked out of Auschwitz 75 years ago engaged in reprisals against Germans after the war.

Now these Holocaust survivors were witnessing a rise of anti-Semitism around the world, threatening their grandchildren. “This is a shame and must never be tolerated,” he said.

Lauder also described UN condemnation of Israel in the last years as disproportionate, with all but 39 of 202 resolutions condemning countries in the last seven years directed at Israel.

“Israel has been singled out for the same lies that we have heard about Jewish people for centuries,” he said.

After the anniversary service, world leaders walked the length of the camp where, watched by survivors, they laid candles at the camp monument.

Beneath a red crescent moon in the frozen darkness, the birch trees of this place – carrying the mocking, bucolic name of Birkenau, birch meadow – stood silent witness.