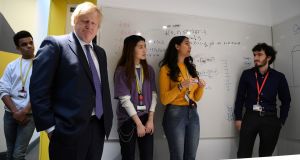 Boris Johnson has rejected Taoiseach Leo Varadkar’s assertion that Britain may need to seek an extension to its post-Brexit transition period beyond December this year. Mr Varadkar said negotiations over Britain’s future trade relationship with the EU could prove too complex to be completed by December’s deadline.

“I have to say this is one of those rare occasions where I’m going to be obliged to respectfully disagree with my friend the Taoiseach and just say I think we can wrap all this up in the time we’ve got,” Mr Johnson said.

“We’ve got till, as you know, the end of the year and we will be doing things very fast, [in a] very friendly and respectful way, and in a way also, I think it’s important to stress, that really ensures we look after the interests of the Republic of Ireland as well.”

“We are taking back control of our waters. We have been clear on that, both in the manifesto and when the prime minister spoke with the [European] Commission president. The EU should be in no doubt about our determination on that issue,” he said.

“It will be for the UK to determine, in the best interests of the UK, who fishes in its waters.”

The British prime minister has put his Brexit sherpa, David Frost, at the head of a 40-person Taskforce Europe that will lead the negotiations after Britain leaves the EU at 11pm on Friday. Mr Frost, who will report directly to Mr Johnson, will face the EU’s chief negotiator Michel Barnier and various ministers will report to parliament on the talks.

Mr Frost’s team will include officials from the foreign office and the treasury and will draw on expertise from other departments for specific policy areas.

The prime minister will chair a cabinet meeting in the north of England on Friday and he will make a televised statement ahead of 11pm, when Britain will leave the European institutions although it will continue to follow EU rules until the end of the transition period.

The department for exiting the EU (Dexeu) will cease to exist at 11pm on Friday and its staff will be moved to other government departments. A campaign led by Conservative MP Mark Francois to ring Big Ben at the moment of Brexit admitted defeat on Monday.