Boko Haram group is known to use children, particularly kidnapped girls, as bombers 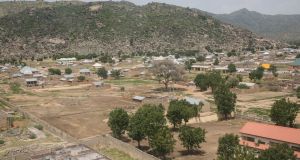 Aerial view of Gwoza, the town that became the headquarters of Boko Haram’s short-lived caliphate from 2014-2015. Photograph: Sally Hayden

Two girls blew themselves up outside a mosque at the former headquarters of Islamist militant group Boko Haram, in the early hours of Sunday – the latest reminder that Nigeria’s devastating insurgency is far from over.

At least two others died from the blasts in Gwoza, Borno State, while 14 people were injured, according to local sources.

Another female bomber was shot and killed by the Nigerian military during an attempted bombing in Gwoza in December – the first since 2016.

“It would be very worrying if this is the emergence of a new trend,” said Feargal O’Connell, Nigeria country director for the International Rescue Committee, an aid organisation working in the town, which had to temporarily suspend some work because of the attacks.

Boko Haram is known to use children, particularly girlsthey have it has kidnapped, as bombers. Mr O’Connell said it wasn’t accurate to call these “suicide” bombings, as the attackers may be victims too. “Suicide attacks would assume intent and agency on the case of the people carrying explosives but... it’s obvious children in these situations are under some kind of duress.”

Gwoza has symbolic significance to Boko Haram, a group formed in Borno State capital Maiduguri in 2002. In August 2014, Boko Haram leader Abubakar Shekau declared Gwoza the headquarters of its caliphate. At the time, the Islamist militant group was controlling an area of land the size of Belgium.

The Irish Times was one of the few international outlets to report from Gwoza after it was retaken by the Nigerian army. Boko Haram was ousted from Gwoza in 2015, and Nigerians who survived its rule described militants celebrating bombings, enslaving women and carrying out brutal executions.

Now, Mr O’Connell said, “there’s a semblance of normality in that kids are going to school, the market is functioning... There’s farming going on but it’s still in a lot of ways a bit cut off from the rest of Borno State. It’s very difficult to get access; for example, humanitarians don’t use the road, we fly by helicopter... A lot of people have fled into Gwoza town. Organisations like the IRC are providing clean water, shelter, and that’s because a lot of government services and government staff haven’t returned to Gwoza.”

Around the edges of the town is a security perimeter and trench, guarded by the Nigerian military, which checks everyone who comes in and out, Mr O’Connell said.

Boko Haram has split in recent years, with a faction of the group declaring allegiance to the so-called Islamic State in Iraq and Syria and branding itself the Islamic State West Africa Province (Iswap). In December, Iswap released a video appearing to show 10 Christians being beheaded.

“The crisis in northeast Nigeria is one of the most serious that the world is facing at the moment,” said Mr O’Connell. “Upwards of two million people are displaced because of fighting, seven million are in need of humanitarian assistance.”

He said roughly 822,000 people were living in areas controlled by Boko Haram. “Geographically we’ve seen the areas that humanitarian organisations can operate in shrink over 2019. It’s increasingly a more difficult and hostile environment.”