As Brexit talks resume, what are the UK’s key policy positions? 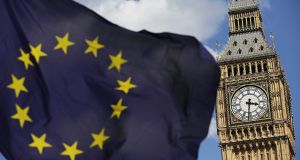 Michel Barnier, the EU’s lead negotiator, has insisted there can be no discussions about the “future relationship” until sufficient progress has been made on settling the divorce: notably on Northern Ireland, citizens’ rights and an exit bill. Photograph: Daniel Leal-Olivas/PA Wire

David Davis, Brexit secretary, travels to Brussels on Monday for the latest round of EU exit talks, calling for “flexibility and imagination” from both sides, amid signs that negotiations have become deadlocked.

Michel Barnier, the EU’s lead negotiator, has insisted there can be no discussions about the “future relationship” until sufficient progress has been made on settling the divorce: notably on Northern Ireland, citizens’ rights and an exit bill.

Davis, meanwhile, has tried to force the pace. He argues, for example, that discussion of the Northern Ireland Border can only make sense alongside talks on a future EU-UK customs arrangement.

The UK has published seven policy papers setting out how it hopes to achieve Brexit with minimal disruption and downsides. The documents come after Theresa May was accused of a lack of detail in her negotiating objectives.

Three of the British documents – on Northern Ireland, the confidentiality of EU documents and the sale of goods – are related to the divorce phase of negotiations.

The other papers – on customs, data protection, dispute resolution and civil judicial co-operation – are about the future relationship of the EU and UK.

The EU published nine position papers in June and July. The first of these was about the principles for calculating the divorce bill. The UK has not issued its stance on that point.

Here is a summary of the UK’s main proposals:

Last October, May pledged that Britain was leaving “the jurisdiction of the European Court of Justice”, the EU’s highest court, creating uncertainty about which body would enforce and settle disputes between the EU and UK.

The British proposal has been watered down, so the ECJ would not have “direct jurisdiction” after 2019. This opens the door to some indirect influence: British judges will be free to take into account future ECJ decisions, and EU-UK agreements could specify that ECJ decisions could be used to ensure close alignment of regulatory standards.

Under British proposals, UK individuals and businesses will be able to enforce their rights through British courts. Any disputes between the UK and the EU for example, over divergences in regulation – will be dealt with by a “new dispute resolution mechanism”.

The EU wants the ECJ to adjudicate on disputes regarding the divorce; the UK rejects this, saying it would be unprecedented for one party to an international agreement to submit to the other’s court.

Instead, for both the divorce and the future relationship, Britain says a joint committee of EU and UK nominees or arbitration panels could settle disputes.

Britain wants to leave the European customs union in 2019, but maintain “the freest and most frictionless trade possible in goods” with the EU. It also wants to pursue its own independent trade policy.

The UK has proposed two models: a customs partnership and a streamlined customs arrangement, both of which throw up political, legal and technical challenges.

The partnership would mean no customs checks between Britain and the EU; instead Britain would “mirror” EU import controls on goods destined for the EU, and vice versa.

A “tracking mechanism”, to check goods’ end users, and a “repayment mechanism”, for traders to claim refunds on tariff, might be needed.

The streamlined customs arrangement would involve some customs checks, but would use “technology-based solutions” and reduced bureaucracy to ease trade. Britain recognises that both these models are in effect unprecedented.

Britain’s arguments around a seamless Border have been greeted sceptically: a senior EU official said they reflected “magical thinking”, referring in particular to how controls would work in Ireland.

Britain is committed to not introducing any border infrastructure at the 500km Northern Ireland Border. That means no passport controls, customs checks or even cameras. But after leaving the customs union, Britain is likely to have different tariffs, trade agreements and migration rules to the EU, of which Ireland will still be a member.

The paper on Ireland tries to square this circle: Irish and Northern Irish nationals would maintain their rights to live and work on either side of the Border. Small companies would be exempt from Border procedures if a highly streamlined customs arrangement is introduced.

To help farm trade across the Border, the UK proposes “regulatory equivalence” with the EU on food and agricultural products (meaning no chlorinated chicken). Britain also proposes continuing to fund peace programmes in the region alongside the EU.

These proposals deal with the status of goods that are in the process of manufacture or which have received regulatory approval before Brexit.

Under British proposals, products would not have to undergo EU regulatory processes after Brexit if they have already been approved by the relevant UK authority before Brexit. This is a key demand of carmakers, drugmakers and others, some of whom – such as Skoda – have had entire product lines approved in the UK. The EU, in contrast, wants all products to undergo EU inspection.

Goods could also be exported to the EU from Britain, and vice versa, after Brexit with no additional requirements, so long as a retailer or supplier has already ordered them. The EU position is more stringent: only goods already on sale should be exempt from future requirements.