At least five deaths and more than a dozen injuries have been reported in the aftermath of Harvey, the tropical storm that pounded the Gulf Coast of Texas over the weekend. Video: REUTERS 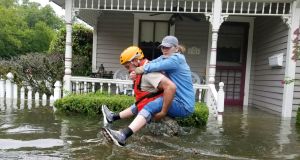 At least five deaths and more than a dozen injuries were reported by Sunday in the aftermath of Harvey, the hurricane that tore across the Gulf Coast of Texas over the weekend.

The powerful system, now a tropical storm, pounded the region with torrential rains that were expected to continue for days, causing catastrophic flooding, according to the National Hurricane Center.

The public hospital for Harris County, which includes Houston, began evacuating patients after flooding disrupted its power supply. The National Weather Service forecast rainfall of 15 to 25 inches through Friday, with as much as 50 inches in a few areas. Emergency responders completed more than 1,000 high-water rescues during the night and asked the public to donate boats.

The effects associated with Tropical Storm Harvey are “unprecedented” and “unknown and beyond anything experienced”, the national weather service said in a tweet.

Dennis Feltgen, a spokesman for the National Hurricane Center, said: “We have a catastrophic, life-threatening flood event taking place over southeastern Texas, including the Houston metropolitan area. It’s bad now and it’s getting worse.”

The storm pummelled Houston and the surrounding region, bringing major flooding and killing at least five people in the region. Emergency lines in the city were soon choked with calls from people stranded on highways, and residents began sending desperate tweets directly to officials.

One video showed cars almost completely submerged under one of the city’s many elevated highways. Emergency responders completed more than 1,000 high-water rescues during the night. City officials urged flooded residents to head to their roofs, not their attics.

“Many neighbours are screaming for help,” wrote one man wrote on Twitter. William McKeon, president a of the Texas Medical Center in Houston, said the flood control systems in the massive hospital complex had been activated. Patients, however, were having difficulty reaching medical care.

“Many outlying streets that are the channels to get to the medical centre are flooded,” Mr McKeon said.

Around noon, officials in Harris County announced that Ben Taub Hospital, a part of the medical centre, was being evacuated.

US president Donald Trump said he would visit Texas on Tuesday.

Meanwhile, the Insurance Information Institute said it was still too soon to make precise estimates of the damage to homes and businesses. “It could be a flood loss like Katrina because of the amount of water that’s coming in ... not as much wind as it will be water,” said an institute spokeswoman.

Hurricane Katrina resulted in more than $15 billion in flood insurance losses in Louisiana and Mississippi that were paid by the National Flood Insurance Program, a federal programme that is the only source of flood insurance for most Americans. New York Times Service