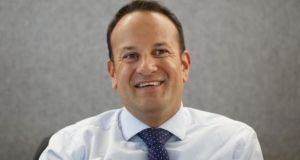 Taoiseach: ‘We want to stay in the Common Travel Area, which allows people to travel freely between north and south and Britain and Ireland.’Photograph: Cole Burston/Bloomberg

Taoiseach Leo Varadkar has said he remains very confident there will be no need for passport controls on the Irish Border post-Brexit.

Mr Varadkar was responding to concerns raised by former president Mary McAleese, who questioned how the EU and UK could differentiate between Irish citizens, who are set to be allowed to travel freely across the Border, and other European nationals.

Mrs McAleese said she did not know how some form of ID checking could be avoided.

If the almost-century-old Common Travel Area (CTA) agreement remains in place post-Brexit, UK and Irish citizens will continue to be able to work and travel freely across the two jurisdictions.

The former Irish president queried how the UK authorities would be able to establish whether a person crossing the Border was a beneficiary of the CTA or not.

“My view is that sooner or later pressure will come on to make it an ID card phenomenon,” she said.

The Taoiseach, who like Mrs McAleese was interviewed on the border issue by RTÉ, said he was sure passport controls would not be needed.

He highlighted that the UK government would seek to control immigration not by physical checks on borders, but by imposing limits on rights to work and claim benefits.

“In life and politics nothing is 100 per cent certain, but I am very confident that there won’t be passport controls between Northern Ireland and Ireland,” he said.

“We want to stay in the Common Travel Area, which allows people to travel freely between north and south and Britain and Ireland.

“The British government wants that too and so do our European partners.

“So while there will be a big debate and difficult negotiations around issues such as trade, around issues such as the financial settlement, the fact that Dublin, Belfast, London and Brussels want to continue passport-free travel between Northern Ireland and Ireland gives me absolute assurance that that won’t be the case.

“I understand former president McAleese’s concerns but it is one area that I am very sure about and that’s that there won’t be a requirement to produce a passport to travel to Northern Ireland.”

He added: “The reason why I can be confident that there won’t be passport controls between Northern Ireland and Ireland is the fact that nobody is looking for them.”

In a position paper published earlier this month setting out its stance on the Irish border in Brexit talks, the UK government argued against any new technological or physical monitoring.

Confounding speculation it would advocate CCTV cameras or number plate recognition systems, the Whitehall document effectively recommended no change to the current arrangements.

The UK’s vision of frictionless borders has been met with scepticism in the EU.