Some 30,000 Houston residents are expected to be left homeless amid further flood threat

A reporter in Houston has helped rescue a lorry driver from flooding live on local TV. Brandi Smith of KHOU 11 News and cameraman Mario Sandoval spotted the lorry stuck in flood water while they were covering Storm Harvey. Video: KHOU 11 News

At least five deaths and more than a dozen injuries have been reported in the aftermath of Harvey, the tropical storm that pounded the Gulf Coast of Texas over the weekend. Video: REUTERS 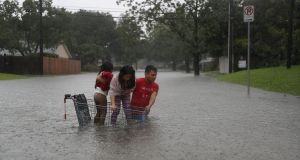 A man helps children across a flooded street as they evacuate their home after the area was inundated with flooding from Hurricane Harvey. Photograph: Getty 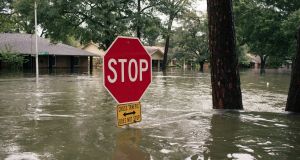 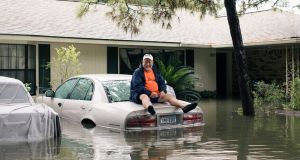 A man sits on a car as flood waters cover the Meyerland neighbourhood of Houston, Texas, US. Photograph: Alyssa Schukar/The New York Times 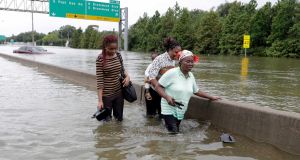 Evacuees wade down a section of Interstate 610 as flood waters rise, in Houston, Texas, the US. Photograph: David J Phillip/AP Photo 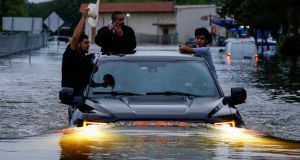 Residents use a truck to navigate flood waters in Houston, Texas, US. Photograph: Adrees Latif/Reuters 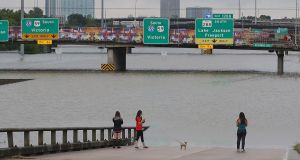 People view the flooded highways in Houston, Texas, the US. Photograph: Thomas B Shea/AFP/Getty Images 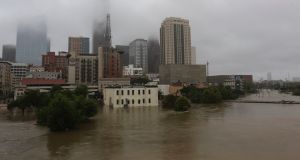 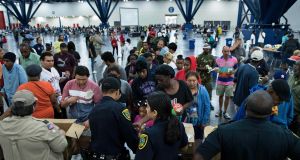 Flood victims gather for food at a shelter in the George R Brown Convention Centre, in Houston, Texas, the US. Photograph: Brendan Smialowski/AFP/Getty Images

US president Donald Trump said on Monday he would talk with Congress about how to fund what will be a “very expensive” recovery from Hurricane Harvey, as deadlines loom on the US budget and federal debt ceiling.

Speaking to reporters in the Oval Office as he prepared for a trip to the storm zone, Mr Trump lauded the efforts by Texans to extract storm victims from flooded areas of Houston and beyond after record amounts of rainfall from the hurricane.

“We’re dealing with Congress. As you know it’s going to be a very expensive situation,” said Mr Trump.

“It is a historic amount of water. There’s never been anything like it. So the people are handling it amazingly well and the people of Texas as you know have really persevered. And when you watch the spirit and the enthusiasm and helping each other and the teamwork, it’s really been something.”

He said to people suffering from Hurricane Harvey and the resulting flooding that “you’re going to have what you need and it’s going to go fast”, telling victims that “we are 100 per cent with you”.

Mr Trump is to visit Texas on Tuesday. He said he might return on Saturday and could stop off in Louisiana, where the storm is now dumping rain.

Houston is facing worsening flooding in the coming days as what is now Tropical Storm Harvey dumps more rain on the city, swelling rivers to record levels and forcing federal engineers on Monday to release water from area reservoirs in hopes of controlling the rushing currents.

Some 30,000 Houston residents were expected to be left temporarily homeless by Harvey, which became the most powerful hurricane to strike Texas in more than 50 years when it came ashore on Friday near Corpus Christi, about 354km south of Houston.

It has since lingered around Texas’s Gulf Coast, where it is forecast to remain for several more days, drenching parts of the region with a year’s worth of rain in the span of a week.

Two people have been confirmed dead as a result of the storm. A Houston television station reported on Monday that a further six family members were believed to have drowned when their van was swept away by flood waters.

Harvey’s centre was 148km southwest of Houston on Monday morning and forecast to arc slowly back towards the city through Wednesday, with the worst floods expected later that day and on Thursday.

Rains have already submerged cars and turned freeways into rivers.

Police and coast guard teams have rescued some 2,000 people in the region so far, plucking many from rooftops by helicopter, as they urged the hundreds believed to be marooned in flooded houses to hang towels or sheets outside to alert rescuers.

Texas governor Greg Abbott has activated all 12,000 members of the state’s national guard, who joined local police in the effort to rescue people before waters rise again.

Schools, airports and office buildings in the US’s fourth-largest city were shut on Monday as chest-high water filled some neighbourhoods in the low-lying city that is home to about 2.3 million people.

The Houston metropolitan area, home to 6.8 million people in total, is also the US’s refining and petrochemical hub, an industry which has been crippled by the storm. Numerous refiners have shut operations, possibly for weeks.

Torrential rain also hit areas more than 240km away, swelling rivers upstream and causing a surge that was heading towards the Houston area, where numerous rivers and streams have already been breached.

Some areas have already seen as much as 76cm of rain, according to the US National Weather Service.

By the end of the week, in some Texas coastal areas the total precipitation could reach 127cm, which is the average rainfall for an entire year, forecasters said.

Harvey is expected to produce an additional 38 to 63cm of rain through Friday in the upper Texas coast and into southwestern Louisiana, the National Hurricane Centre said.

About 5,500 people were in temporary shelters as of Monday morning, city officials said.

More than 30,000 people were expected to be placed temporarily in shelters in total , Fema administrator Brock Long said at a news conference on Monday.

The George Brown Convention Centre in downtown Houston now has about 2,500 people, up from 1,000 last night, as people continue to arrive at the centre.

Wendy Rom (24) was among those taking refuge at the centre with her husband and daughter.

“The water was high, entering our house,” she said, “so we moved to the second floor, but they started evacuating the neighbourhood so I came with my whole family.”

Dallas, 386km north of Houston, also was setting up a “mega shelter” at its convention centre to house 5,000 evacuees, the city said in a statement.

The US army corps of engineers said on Monday that it was releasing water from two nearby reservoirs into Buffalo Bayou, the primary body of water running through Houston.

“If we don’t begin releasing now, the volume of uncontrolled water around the dams will be higher and have a greater impact on the surrounding communities,” said Col Lars Zetterstrom, the corps’s Galveston district commander.

The Harris County Flood Control District said it expected the release to start flooding homes around the Addicks and Barker reservoirs on Monday.

Authorities ordered more than 50,000 people to leave parts of Fort Bend County, about 55km southwest of Houston, as the Brazos River was set to crest at a record high of 59ft (18m) this week, 14ft above its flood stage.

Houston did not order an evacuation, even a voluntary one, due to concerns about people being stranded on city highways now consumed by floods, Mr Turner said on Sunday.

On Monday, Mr Long did not question the decision, saying the timeframe “for evacuation of the city of Houston could take days, days, literally days”.

Mr Abbott, who had suggested on Friday that people leave the area, on Monday told CBS’s This Morning that “the time for making that determination has passed, and [there’s] no need to for us to relitigate that issue right now”.

Trump, facing the first big US natural disaster since he took office in January, had signed a disaster proclamation for Texas on Friday, triggering federal relief efforts.

Almost half of the US refining capacity is in the Gulf region. Shutdowns of refining operations extended across the coast, including Exxon Mobil’s facility in Baytown, the nation’s second-largest refinery.

Federal authorities predicted it would take years to repair the damage from Harvey.

The expected rain conjured memories of Tropical Storm Allison, which lingered for days over south Texas in 2001, flooding 70,000 homes and causing $9 billion (about €7.5 billion) in damage.

All Houston port facilities were closed on Monday because of the weather threat, a port spokeswoman said.

More than 263,000 customers in the Houston area were without power on Monday morning, utilities CenterPoint Energy, AEP Texas and TNMP said. CenterPoint warned it could not update its figures due to limited access caused by flooding.