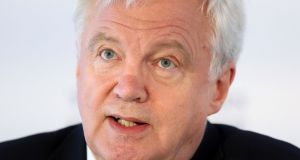 David Davis will warn Brussels not to ’drag its feet’ in discussions. Photograph: Jonathan Brady/PA Wire

British Brexit secretary David Davis is heading for a Brussels showdown after demanding the European Commission be more “flexible” in negotiations on the United Kingdom’s withdrawal from the EU.

With the third round of formal talks beginning on Monday in the Belgian capital, Mr Davis is pushing for EU negotiator Michel Barnier to be less rigid in his refusal to discuss the post-Brexit relationship between the United Kingdom and Europe.

Mr Barnier insists progress must be made on key aspects of the withdrawal deal, including the UK “divorce bill”, ex-pat citizens’ rights and the Irish Border, before there is any talk of future arrangements for crucial issues such as trade.

Leaders of the 27 remaining EU states will decide in October whether the divorce talks have got far enough to move on to the second phase.

But Mr Davis is expected to urge Brussels to show more “imagination” to drive talks forward.

His Department for Exiting the EU (DExEU) has in the last week published a slew of papers setting out Britain’s vision for a “deep and special” future partnership, dealing with issues ranging from the role of the European Court of Justice to customs arrangements and data protection.

Officials said the documents showed that conversations about the exit deal are inextricably linked with the shape of the future relationship.

A UK government source indicated Mr Davis will warn Brussels not to “drag its feet” in discussions which must be completed in time for the deadline of March 2019.

“This round of negotiations will focus on thrashing out the technical detail on important matters related to us leaving the EU, and will act as a stepping stone to more substantial talks in September,” said the source.

“The UK has been working diligently to inform the negotiations in the past weeks, and has published papers making clear our position on a wide range of issues from how we protect the safe flow of personal data, to the circumstances around Ireland and Northern Ireland.

“Now, both sides must be flexible and willing to compromise when it comes to solving areas where we disagree.

“As the EU itself has said, the clock is ticking so neither side should drag its feet.”

Mr Barnier infuriated some in London by his response to the DExEU papers, tweeting that although he was “looking forward” to discussing them, the “essential” issue was to make progress on citizens’ rights, the financial settlement and Ireland.

Brussels is understood to be frustrated at Mr Davis’s refusal to set out the United Kingdom’s proposals for calculating its final financial settlement with the EU.

The two men are due to meet on Monday before leaving teams of negotiators to thrash out technical details over the remainder of the week, leading up to a press conference at the Commission’s Berlaymont headquarters on Thursday.