Princess Diana died 20 years ago on August 31, 1997 in Paris. One million people lined the streets of London for her funeral cortege. Video: Reuters 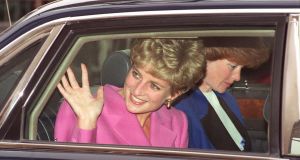 Princess Diana is still considered a symbol of her era for those old enough to remember her. Photograph: Joel Robine/AFP/Getty Images

Eating strawberries beside a memorial to Diana, Princess of Wales, two teenagers debated when it was that the princess had died. Was it in 2000? Or more recently? The revelation that Diana died in 1997 – 20 years ago on Thursday – took them by surprise.

“That was before we were born!” said Floss Willcocks (18), who is to start college this autumn. People in their late teens “don’t really know much about her”, added Willcocks’ companion, Caleb Barron, also 18. “She’s not really an icon for people our age.”

It was an exchange that highlighted a generational shift, a yawning gap in cultural assumptions and political aspirations between older and younger Britons that also showed itself in the vote on whether to leave the European Union.

After Diana was killed in a car crash in Paris two decades ago, she was mourned as a national hero. More than 1 million people lined the streets of London to watch her funeral cortege, while more than half of Britons watched it on television.

Lauded for her philanthropy, warmth and glamour throughout the 1990s – as well as for her traumatic divorce from Prince Charles, the heir to the British throne – Diana is still considered a symbol of her era for those old enough to remember her.

By giving frank interviews about her personal life, or by appearing alongside Aids victims at a time when they were stigmatised, Diana modernised the stuffy image of the British monarchy. Her death, which prompted an unusually wide outpouring of affection and sorrow, also challenged the idea that Britons lacked the capacity to emote.

But for young adults, many of whom were not alive when she died, this week’s anniversary carries less resonance. “There’s a funny divide, basically,” said Richard Power Sayeed, the author of 1997, a coming book about the events in Britain that year. For younger Britons, “she’s basically like Grace of Monaco, but more recent”, said Power Sayeed, who has spoken to more than 50 people about their memories. “They don’t register just how much it matters, or how much she mattered.”

For those at least 30-years-old, however, Diana’s death remains a cultural touchstone. “Apart from people in their 20s or younger, it’s something that we all share,” Power Sayeed said. “Everyone wants to tell me about the moment they heard she died.”

Recent research by pollster YouGov appears to support part of Power Sayeed’s thesis. It found that Britons over 50 were most likely to remember Diana for her reputation – as “the People’s Princess”, as she was branded by Tony Blair, Britain’s prime minister at the time, in the days following her death.

By contrast, those 18-24 were most likely to know her simply as someone who had died in a car crash. The same generational disconnect was visible in last year’s referendum to leave the European Union, when exit polls suggested that 75 per cent of voters 18-24 had cast ballots to remain in the union – against 39 per cent of people over 65.

In Britain’s general election in June, more than 60 per cent of the 18-to 24-year-olds were estimated to have voted for the Labour Party, the left-wing opposition, compared with less than 30 per cent of the older group.

This generational gap is also defined by a difference in economic opportunity. Younger Britons, for example, find it far harder to buy property than their parents did at their age. The average cost of a home in Britain is now 7.6 times the average annual salary, a ratio that has more than doubled in the past two decades.

Diana’s death occurred just as many of these economic tensions began to emerge, said Shiv Malik, co-author of Jilted Generation, a book documenting the challenges faced by British millennials. British house prices began to balloon in 1996, while free university education ended in 1998.

“It was almost at that moment,” said Malik, in a reference to Diana’s death, “that life chances started to diverge”.

Besides the Diana memorial in Hyde Park in London, however, the memory of Diana herself was the most obvious example of generational differences. The two 18-year-olds said it was not until Diana’s elder son, Prince William, married Kate Middleton a few years ago that they began to grasp who Princess Diana was – and even then, her status was lost on them.

“I look at her and I think, ‘God, I’d never get that haircut,’” Willcocks said, laughing. “Now it’s all about Kate. She’s an icon for our age. She’s the Diana of our age.”

But for 78-year-old Jo Dobson, who compared Diana’s death to the demise of a family member, there is no comparison between the Princess of Wales and the Duchess of Cambridge, as Middleton is now known. “We like Kate,” said Dobson. “But we say that nobody will ever fill Diana’s shoes as such.”

Dobson is admittedly a special case. When her husband died this year, Dobson placed a photograph of Diana in his coffin. Her sprawling collection of Diana memorabilia is so vast that she has “no more wall” to show it, even though some of it is now on display in a museum in Gloucester.

But even Dobson acknowledges that wider interest in Diana is not what it once was. Membership in the Diana Circle, an amateur group she founded to preserve the princess’s memory, has fallen from “quite a few hundred” to only 200. The last post on the group’s online message board was left nearly two years ago.

“Where are all the hundreds of thousands that were there 20 years ago?” Dobson asked, referring to those who watched Diana’s funeral. “I don’t know where they are!”

In another sign of Diana’s fading legacy, The Diana, Princess of Wales Memorial Fund, a charity set up in the days after her death, shut down in 2012 after spending £112 million (€121 million ) on charitable causes. But one charity – The Diana Award – strives to maintain her legacy among young people, giving annual prizes to impressive youths and organising mentoring schemes for others.

And some younger interviewees said they still had a clear picture of Princess Diana’s principles, despite their not having been born before she died. Diana was “a phenomenally amazing woman”, said Connor Tomlinson, a 17-year-old member of Britain’s Youth Parliament. “For me the main thing she stands for is her voluntary service and the charity service she did abroad.”

Victoria Azubuike (20), a trustee at London Youth, an organisation that helps young people, agreed. “There’s still so much power in that name,” she said, adding that most young people “see her as someone who gives to the less fortunate”.

Recent media appearances by her sons, Prince William and Prince Harry, are also likely to have raised Diana’s profile among younger Britons, said Richard Palmer, royal correspondent for the Daily Express. Harry and William recently spoke publicly about mental health, and described their difficulties in dealing with their mother’s death.

Subsequent articles about Diana performed unexpectedly well on the Express website, which has a younger readership than the print edition, Palmer said.

But the Express’s recent print coverage of Diana – or more accurately the relative lack of it – also hints at a generational shift in attitudes toward the princess. Until relatively recently, the Express was famous for its relentless – obsessive, some said – coverage of Diana’s death. But this summer, the print edition has not published many special features about the anniversary, Palmer said.

That, he suggested, was perhaps because of a change in the demographics of the print readership. In years past, there was “definitely quite a large group of newspaper readers who felt much more agitated and aggrieved” about Diana’s fate. But those readers “don’t seem to be around any longer,” Palmer said. “I think a lot of them have died.”