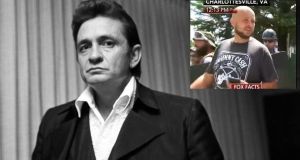 The family of Johnny Cash said they were ‘sickened’ to see a Charlottesville right wing protester photographed wearing a T-shirt with the musician’s name emblazoned on it. Photograph: Michael Ochs/Getty Images.

The family of Johnny Cash have said they were “sickened by the association” with a Charlottesville right wing protester photographed wearing a T-shirt with the musician’s name emblazoned on it.

In an open letter posted on Facebook, Cash’s daughter, musician Rosanne Cash, condemned the white supremacists who gathered in the Virginia town, resulting in clashes that saw three killed and dozens injured.

The letter, which is signed by all five of Cash’s children - Rosanne, Cathy, Tara, Cindy and John Carter Cash - denounces the “self-proclaimed neo-Nazi, spewing hatred and bile” featured in the Fox News footage.

“The white supremacists and neo-Nazis who marched in Charlottesville are poison in our society, and an insult to every American hero who wore a uniform to fight the Nazis in the second world war,” it says.

“Several men in the extended Cash family were among those who served with honour.”

The letter goes on to detail the musician’s political standpoint, explaining how Cash “was a man whose heart beat with the rhythm of love and social justice”, and recalling how he received humanitarian awards from the Jewish National Fund, B’nai B’rith and the United Nations, as well as championing the rights of Native Americans and protesting against gun violence and the war in Vietnam.

It states that he “was a voice for the poor, the struggling and the disenfranchised, and an advocate for the rights of prisoners”.

Cash “would be horrified at even a casual use of his name or image for an idea or a cause founded in persecution and hatred,” it continues. “Our father, as a person, icon, or symbol, is not you. We ask that the Cash name be kept far away from destructive and hateful ideology.”