Rome to reduce night-time water use to combat drought 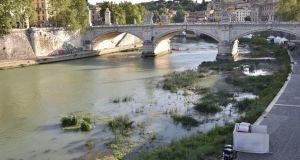 A view of the Tevere river on August 28th during the drought that has hit Rome. Photograph: Giorgio Onorati/EPA

Rome’s water utility is planning to reduce water pressure in factories and buildings across the capital in its latest effort to combat a nationwide drought that has parched reservoirs and wreaked havoc on Italian agriculture.

Acea said the night-time reductions would begin next month when many Romans return from holiday.

Italy has suffered a drought across the country this summer, with 70 per cent less rain falling on Rome than average.

The problem in the capital is compounded by years of neglect on its leaky aqueducts, which lose about 40 per cent of water before it reaches consumers.

Acea said 1,300 leaks had been repaired.

Italian farm lobby Coldiretti estimates more than €2 billion in losses nationwide due to the drought.